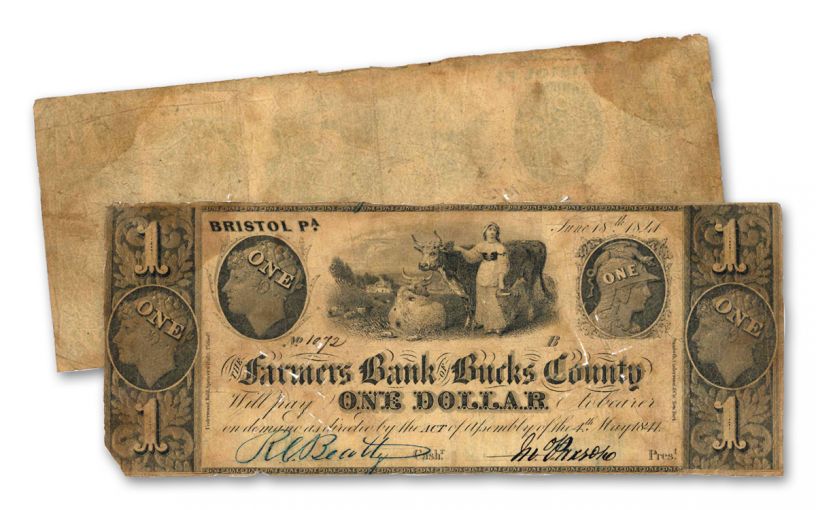 Availability: In Stock
This item will ship within 2 business days.
Item #
356324
Add to Wish List Add to Wish List Wishlist is for registered customers. Please login or create an account to continue. Add to Compare

Though the United States Mint was established following the Revolutionary War, its facilities weren’t anywhere near being able to satisfy the currency needs of the new nation. To answer the ever-growing needs for a medium of exchange, numerous banks and other businesses issued quantities of their own paper currency, included among those issued were these notes printed in 1841 by the Farmer’s Bank in Bucks County, Pennsylvania.

Located in Bristol, Pennsylvania just a stone’s throw away from the site where George Washington crossed the Delaware River on Christmas night in 1776 to surprise a Hessian Army at the Battle of Trenton, the Farmers Bank of Bucks County was established shortly after the War of 1812 to protect the business interests of those who lived outside Philadelphia and the other big cities of the time. Paper currency of all types and denominations were issued – but as far as the world knew, these notes never existed! Until this discovery, only proofs were believed to exist.

But recently, more than 175 years after they would have been issued, a small currency hoard of $1 and $2 Farmers Bank of Bucks County notes was discovered in a Pennsylvania barn. Although these notes were wrapped in bundles and never saw the light of day, they are still considered “Circulated” due to being stored in a barn for nearly two centuries. While the barn environment with its fluctuating temperatures was not an ideal place to stores these notes, their beautiful vignettes are still clearly visible. The artful design on the $1 notes available in this offer shows a woman standing with cows in the center of the note flanked by Roman heads on either side.

Just 98 of these $1 notes are available so take advantage of the wonderful find of pre-Civil War currency and click one of these pieces to your cart today!