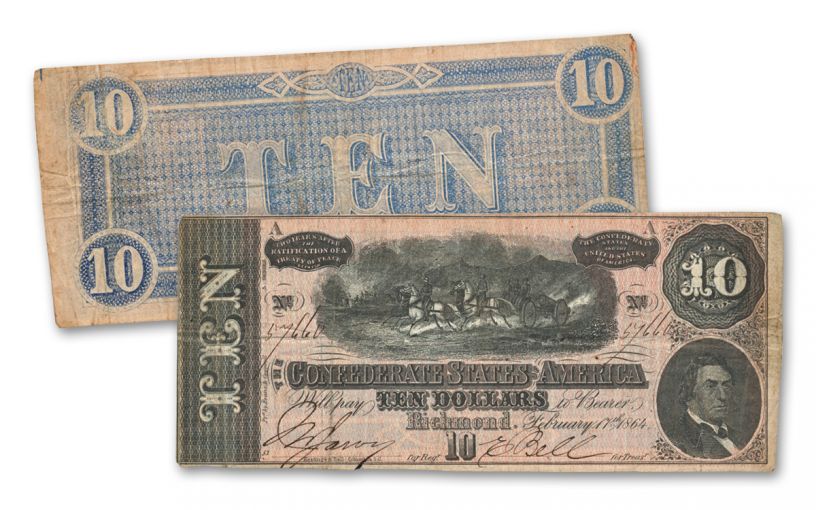 Availability: In Stock
This item will ship within 2 business days.
Item #
367473
Add to Wish List Add to Wish List Wishlist is for registered customers. Please login or create an account to continue. Add to Compare

As you might imagine, federal funds were cut off to Southern States when they seceded from the United States and formed the Confederate States of America. And so, to keep its economy going, the Confederacy printed these $10 Confederate Notes. Here we have a note for your collection that was printed in 1864 the same year that Union General William T. Sherman captured Atlanta and began his “March to the Sea,” campaign that assured President Abraham Lincoln would be elected for a second term.

This colorful note was the last $10 note issued by the Confederacy. The front features a popular vignette of a stampeding horse-drawn artillery caisson alongside Confederate Cabinet member Robert M.T. Hunter. The back of the note displays its ten-dollar denomination in large, bold letters. Like all Confederate notes, this one comes hand-signed and numbered by a Confederate soldier or a member of his family.

More than 150 years old, it’s remarkable that any of these historic pieces of Civil War history have survived. Printed in large sheets and hastily cut so they could circulate as fast as possible, it’s not uncommon for these notes to have uneven margins Plus, most were destroyed following the Southern defeat in the Civil War because they were deemed worthless with no government to back them with hard assets. But the notes available here all come in moderately circulated Very Fine to Extremely Fine (VF–XF) condition.

Now you can travel back in time to an era when brother fought against brother for the very fate of the nation itself. Add this 1864 $10 Confederate Note to your collection today!