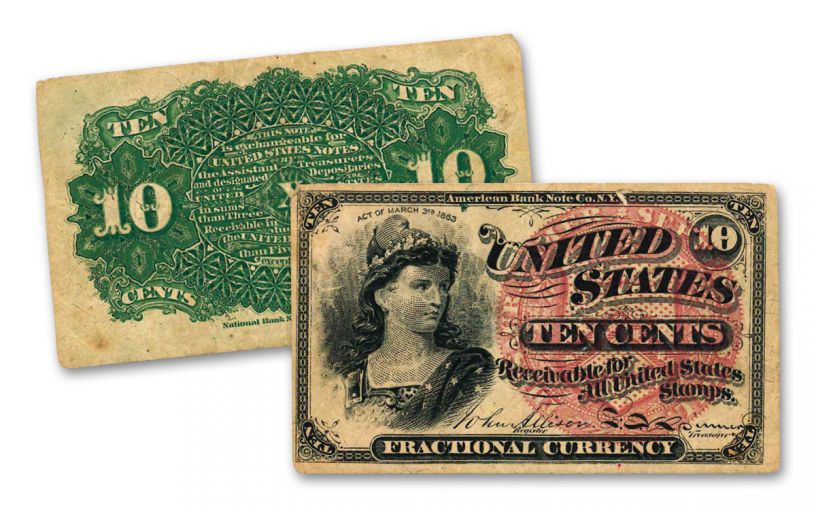 Availability: Out of Stock
This item is currently Out of Stock. Please sign up to be notified if this product becomes available.
Item #
353575
Add to Wish List Add to Wish List Wishlist is for registered customers. Please login or create an account to continue. Add to Compare

When the Civil War broke out in 1861, a fearful public began hoarding its coins as if their very lives depended on it. This caused a major problem as the supply of circulating coins seemed to dry up almost overnight – people even starting using postage stamps to make change! In response, the U.S. government in 1862 began issuing Fractional Currency Notes – paper currency to stand in for the circulation coinage that had stopped circulating.

The concept of fractional paper currency was not unique to this era. Paper currency was also used extensively during the Revolutionary War, but it wasn’t until the crisis of the Civil War that the government again exercised its right to issue paper money. That didn’t make things easier to swallow for an initially skeptical public – the concept of paper coins was just as strange to folks in the 1860s and 1870s as it is today!

Fractional Currency Notes were issued with face values ranging from 3 cents to 50 cents. To differentiate them from postage stamps the government issued them with more colorful printing on both the front and back. This Ten Cents Fractional Currency Note was released as part of the Fourth Issue distributed from 1869-1875 and features a detailed portrait of Liberty alongside a large red seal. The back has an ornate design with legal copy that explains how to redeem the note. Each note measures approximately 79 mm x 46 mm and comes in Fine condition. Date varies

Known as “shinplasters,” these notes were ultimately accepted despite the derogatory nickname. A shinplaster was a piece of paper Revolutionary War soldiers put in their boots to cushion their shins against chafing and rash. Common, low-denomination notes – perceived as almost worthless compared to hard currency such as gold and silver – came to be known by this term. While this denomination seems ridiculously small for a bank note, remember that 10 cents in 1870 is worth about two dollars today! Fractional currency remained in use until 1876, when Congress finally authorized the minting of fractional silver coins to redeem the outstanding fractional currency.

These notes are a fascinating and little-known aspect of our nation’s Civil War-era history. Add one of these unique 10 Cents Fractional Currency Notes to your collection today!