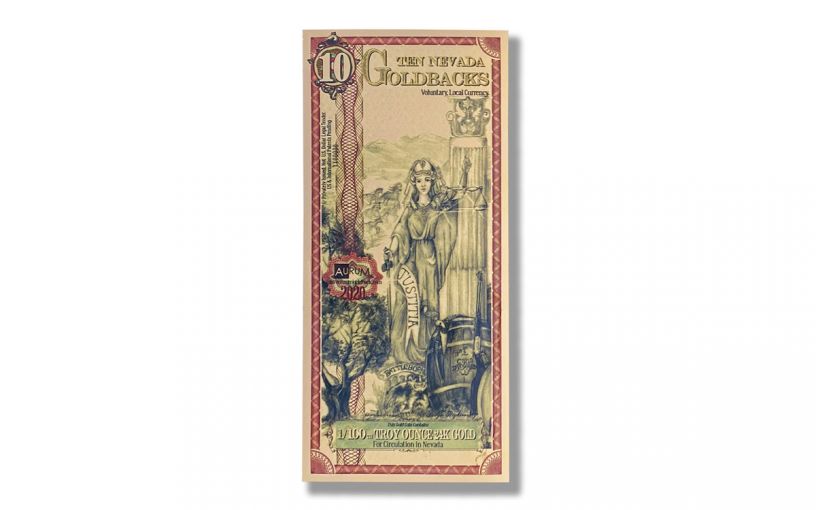 Availability: In Stock
This item will ship within 2 business days.
Item #
366369

These Nevada Goldbacks Will Put Some Gold Back in Your Collection

There’s a voluntary unit of local currency that exists in Nevada called “Goldbacks,” 24-karat gold foil notes that are crafted in increments of 1/1000th of an ounce of highly pure 99.99% fine gold. Already, many local merchants and vendors are accepting this new form if currency as payment. What’s more, they can be accepted in other states that allow the usage of these intriguing and beautifully designed notes.

Each wafer-thin note is coated with a protective plastic cover so it can be circulated, exchanged and used without the gold tearing. They’re meant to be used just like cash to purchase items. If you travel through Nevada, you’ll probably even see signs that say “Goldbacks Accepted Here” to let you know these fractional gold units can be spent just like any other form of legal-tender currency. Anyone can own Goldbacks, even if they aren’t a resident of Nevada.

Not only is each Goldback crafted in increments of 1/1000th of an ounce of pure gold (1 Aurum), but they are also fabulous examples of the engraver’s art — and the larger the denomination, the bigger the note. The design on each denomination features an allegorical depiction of one of the lady virtues and combines her with distinct symbols representing different aspects of Nevada history and culture.

The 10 Aurum 1/100th-oz gold note offered here features the allegorical figure of Lady Justita — Latin for Justice. She is depicted holding the scales of Justice, but unlike how Justice is normally portrayed, her eyes are wide open. The reason for this is that Nevada justices were tasked with watching over a vast region during the Wild West era and needed to keep both eyes open to do so. In her right hand she holds a sword, ensuring that justice would be handed down one way or another. The word “Battleborn” is also woven into the design in a nod to the fact that Nevada became a state in 1864 during the Civil War. Other design elements include a barrel of wine with a Winchester, wild horses and the opulent Storey County Courthouse in Virginia City that was built during the heyday of the area’s silver mining boom.

Not just a novelty item, Nevada’s Goldback Notes are official legal tender. Plus, each bill can be melted down for its precious metal content if its owner would rather have a solid gold piece. It’s always good to have some gold in your portfolio, and now you can obtain pure gold that’s capable of buying basic items such as a loaf of bread, a gallon of milk, a dozen eggs… and more! Go for the gold today and have a ready stash for tomorrow!