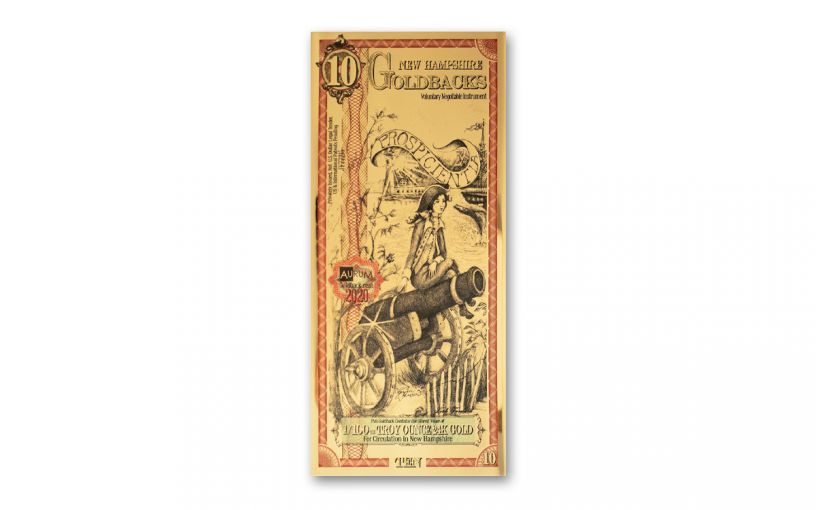 Availability: In Stock
This item will ship within 2 business days.
Item #
409457

There’s a voluntary unit of local currency that exists in New Hampshire called “Goldbacks,” 24-karat gold foil notes that are crafted in increments of 1/1000th of an ounce of highly pure 99.9% fine gold. Already, many local merchants and vendors are accepting this new form if currency as payment. What’s more, they can be accepted in other states that allow the usage of these intriguing and beautifully designed notes.

Each wafer-thin note is coated with a protective plastic cover so it can be circulated, exchanged and used without the gold tearing. They’re meant to be used just like cash to purchase items. If you travel through New Hampshire, you’ll probably even see signs that say “Goldbacks Accepted Here” to let you know these fractional gold units can be spent just like any other form of legal-tender currency. Anyone can own Goldbacks, even if they aren’t a resident of New Hampshire.

Not only is each Goldback crafted in increments of 1/1000th of an ounce of pure gold (1 Aurum), but they are also fabulous examples of the engraver’s art — and the larger the denomination, the bigger the note. The design on each denomination features an allegorical depiction of one of the lady virtues and combines her with distinct symbols representing different aspects of New Hampshire history and culture.

The 10 Aurum 1/100th-oz gold note offered here features the allegorical figure of Prospicientia — Lady Foresight — shown sitting atop a Revolutionary War-era cannon dressed in the uniform of a soldier. A lighthouse shines brightly in the background while a humpback whale breaks the water’s surface. While New Hampshire has a short ocean coastline, it does have one of the most famous lighthouses in all New England, the Portsmouth Harbor Lighthouse on the island of New Castle, at the entrance to Portsmouth Harbor. And, while no battles were fought on New Hampshire soil during the American Revolution, the Granite State did provide the Continental Army with three regiments who were called in to fight at the Battle of Bunker Hill, the Battle of Bennington, the Saratoga Campaign and the Battle of Rhode Island. The back of the note displays the negative image of the front illustration, which also serves as a security feature.

Not just a novelty item, New Hampshire’s Goldback Notes are official legal tender. Plus, each bill can be melted down for its precious metal content if its owner would rather have a solid gold piece. It’s always good to have some gold in your portfolio, and now you can obtain pure gold that’s capable of buying basic items such as a loaf of bread, a gallon of milk, a dozen eggs… and more! Go for the gold today and have a ready stash for tomorrow!