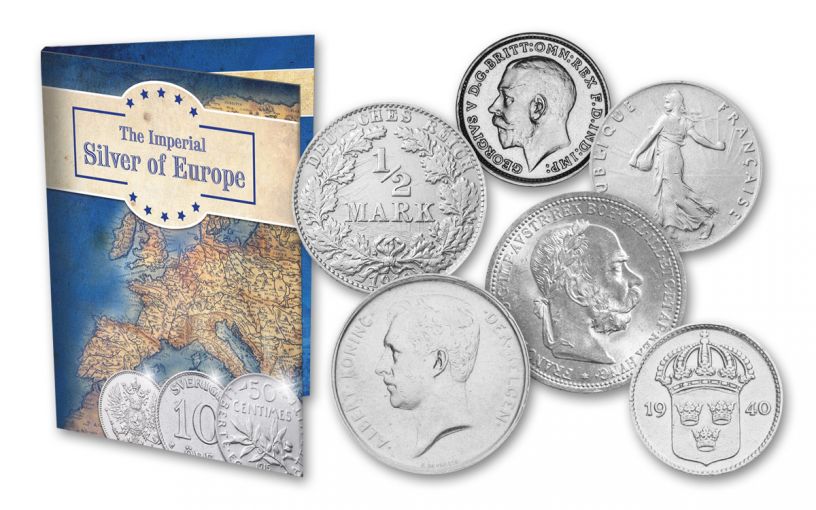 Availability: In Stock
This item will ship within 2 business days.
Item #
356787
Add to Wish List Add to Wish List Wishlist is for registered customers. Please login or create an account to continue. Add to Compare

In the late 1800s through the Turn of the Century, Europe was dominated by monarchies that ruled the continent like it was their own personal playground. And, thanks to a history of intermarriage, these royal families were all related or tied together in some way. As Europe’s “Imperial Age” entered the 20th century, just three nations – France, Switzerland and San Marino – operated with a republican form of government. That would all soon change thanks to the carnage and horror of World War I that pitted these nations against each other and toppled many of those very same monarchies!

Now you can travel back to that bygone era with this Imperial Silver of Europe Ten-Piece Set of coins from a time when monarchies reigned supreme in Europe even as the continent was spiraling downwards into WWI. These legal-tender coins are authentic relics of a period when colonial expansion and efforts to thwart anti-monarchist radicals dominated royal politics. Represented in the collection are coins from Belgium, France, Finland, Great Britain, Italy, Germany, the Netherlands, Austria, Russia and Sweden.

Each coin in this set was struck in silver during the late 1800s or early 1900s and the entire collection comes beautifully housed in an illustrated and fact-filled tri-fold display card that also includes a Certificate of Authenticity. Imperial Europe is a thing of the past – and these sets will be, too if you don’t secure one soon for your personal collection. Click one to your cart today!