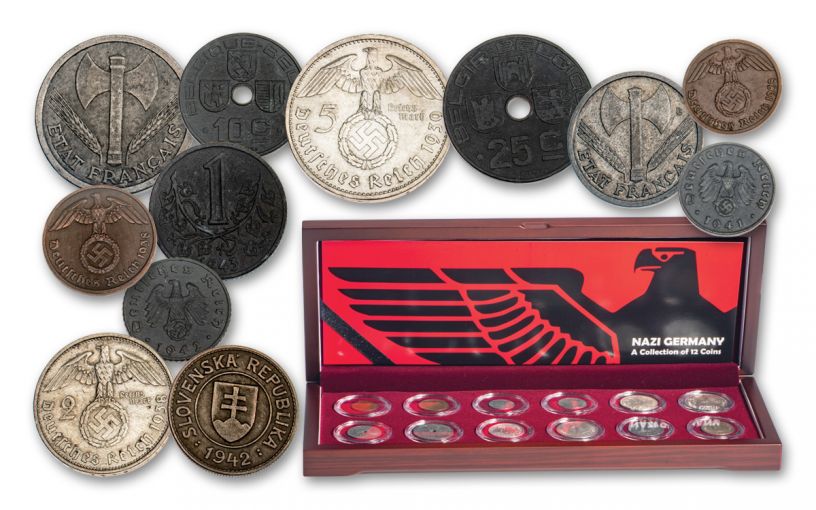 Availability: Out of Stock
This item is currently Out of Stock. Please sign up to be notified if this product becomes available.
Item #
354162
Add to Wish List Add to Wish List Wishlist is for registered customers. Please login or create an account to continue. Add to Compare

The Coins of the Third Reich

As Nazi Germany spread its diabolical control over the nations of Europe, local currency was brutally confiscated, ruthlessly destroyed, and replaced with new currency identifying who was now in charge. It’s a common move for conquering nations, and as with the gold struck during Napoleon’s rule and destroyed thereafter, a small number of coins escaped to become treasured collectibles for history buffs around the world.

This 12-coin collection brings together coins from Nazi Germany and its puppet governments including occupied Belgium, Vichy France, the Slovak Republic and Bohemia/Moravia. Each set comes in a wooden case with a certificate of authenticity to help you tell the story of these coins and the evil that led to their creation.

With 2020 marking the 75th anniversary of the end of World War II, you can bet there will be a renewed interest in anything related to WWII. Get ahead of the curve and secure this historic set of authentic WWII-era artifacts from an era when Adolf Hitler and his Nazi thugs ran roughshod over much of Europe and threatened to spread a reign of conquest and terror across the entire world.