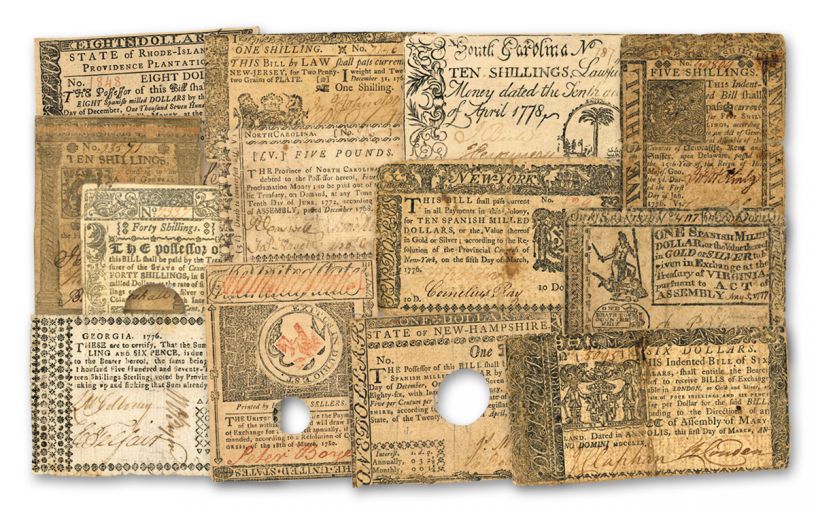 Availability: Out of Stock
This item is currently Out of Stock. Please sign up to be notified if this product becomes available.
Item #
350084
Add to Wish List Add to Wish List Wishlist is for registered customers. Please login or create an account to continue. Add to Compare
Product Description

Before the United States of America came together as one nation, each of the 13 colonies, as a self-governing British settlement, printed its own paper currency – this was literally the folding money of our founding fathers! This complete Colonial Paper Currency Collection brings together one paper note each from Connecticut, Delaware, Georgia, Maryland, Massachusetts, New Hampshire, New Jersey, New York, North Carolina, Pennsylvania, Rhode Island, South Carolina and Virginia.

Each note is over 235 years old and depicts its own unique design. Some include a bushel of wheat, a farming landscape, a single leaf or a Royal Lion and Unicorn. The designs are as different as the colonies that created them and the denominations they present: this set includes 1 Shilling, 5 Shillings, 10 Shillings, 40 Shillings, 5 Pounds, $1, $3, $6, $8 and $10 notes.

This set is truly a journey through the earliest years of our nation. Printed between 1763 and 1780, they sat in the pockets of our Founding Fathers and early countrymen as they went about trying to break free of British control and forge a new nation. You’ll enjoy hours seeking out the life stories behind each hand-written signature on the notes – including a militia officer who aided the Minutemen at the Battles of Lexington and Concord, a secret paid informant for the British Army and a member of the Continental Congress who signed the Articles of Confederation!

Did these notes sit deep in the pockets of our ancestors as they participated in the Boston Tea Party? Were they with George Washington and his men when the crossed the Delaware and nearly froze to death with them during a winter at Valley Forge? Or did they see victories at Saratoga and the final British surrender at Yorktown? There’s no telling how many stories this collection may tell – but you’ll never know unless you hurry and secure this historic collection now!