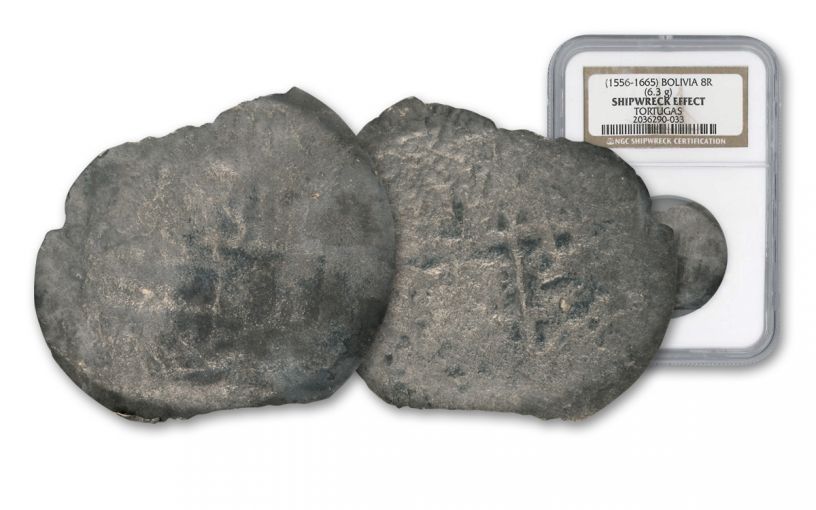 Availability: Out of Stock
This item is currently Out of Stock. Please sign up to be notified if this product becomes available.
Item #
320480
Add to Wish List Add to Wish List Wishlist is for registered customers. Please login or create an account to continue. Add to Compare

The Nuestra Señora Del Rosario was one of the ill-fated ships in the legendary “Spanish Treasure Fleet” of 1622. These 28 ships, laden with treasure from the New World, were hit by a storm that sank eight of their number. Luckily, some coins from the Rosario were discovered, making them some of the scarcest shipwreck coins ever! This is your chance to secure an 8 Reales silver coin now from the famous shipwreck, certified and slabbed by the Numismatic Guaranty Corporation (NGC) as official Shipwreck Effect!

Coins form the Nuestra Señora Del Rosario shipwreck are among the rarest shipwreck coins in the world. Only 332 coins of all denominations have ever been certified by NGC with the Rosario shipwreck designation. These 8 Reales recovered from the Nuestra Señora Del Rosario are the fabled “Pieces of Eight” from pirate lore struck from 1556-1622 and minted in fine 93% silver. Coins like this circulated throughout the Americas and were legal tender in the United States up until 1857!

Don’t miss this opportunity to land one of the world’s rarest and most historically significant shipwreck coins. Lost at sea nearly 400 years ago, now you can find them in your collection!