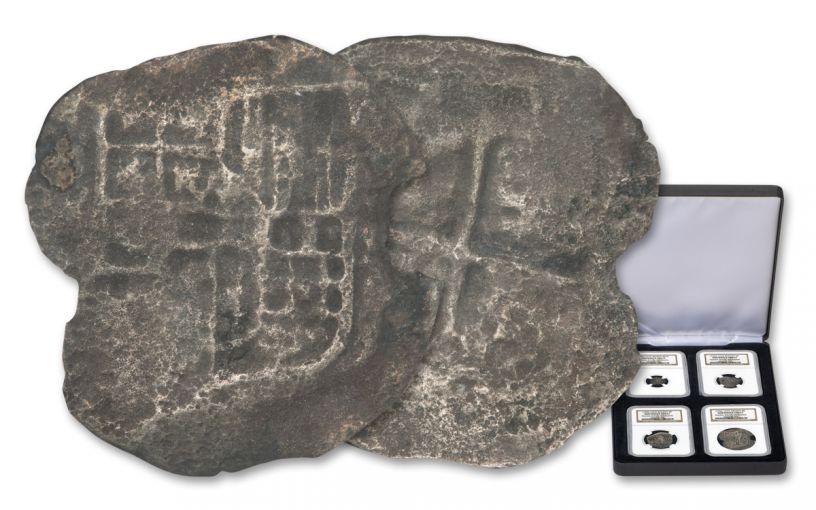 Availability: Out of Stock
This item is currently Out of Stock. Please sign up to be notified if this product becomes available.
Item #
343796
Add to Wish List Add to Wish List Wishlist is for registered customers. Please login or create an account to continue. Add to Compare
Product Description

The Nuestra Señora Del Rosario was one of the ill-fated ships in the legendary “Spanish Treasure Fleet” of 1622. These 28 ships, laden with treasure from the New World, were hit by a storm that sank eight of their number. Luckily, some coins from the Rosario were discovered, and today they’re among the scarcest shipwreck coins ever!

To illustrate how scarce the coins from the Rosario are, consider this: the more-famous ship Atocha thank sank along with Rosario held some 100,000 silver cobs. In comparison, fewer than 1,200 coins have been recovered and authenticated as coming from the Rosario. That’s one hundred times scarcer than the coins of the Atocha!

What’s more, of those 1,200 coins only 322 have been authenticated and pedigreed by the Numismatic Guaranty Corporation (NGC) as official Shipwreck Effect coins– and we’ve got them all! Available exclusively for our customers, we’ve collected these rare shipwreck coins in four-piece sets containing one each of the 1, 2, 4 and 8 Reales coins. These are the famous “Pieces of Eight” coins from pirate lore and each coin comes dated between 1556 and 1622. Plus, the set will come with a detailed storybook to help you share your latest find and the true story of the Rosario shipwreck with friends and family for many years to come.

Don’t miss this opportunity to land some of the world’s rarest and most historically significant shipwreck coins. Lost at sea nearly 400 years ago, now you can find them in your collection! Though exclusive, these sets are incredibly limited, and once they’re gone, they’re gone for good. Don’t miss out!