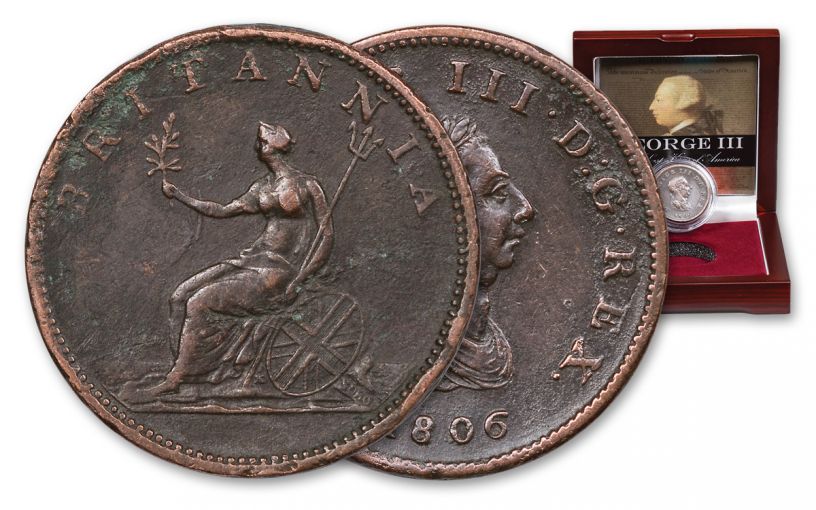 Availability: In Stock
This item will ship within 2 business days.
Item #
338265
Add to Wish List Add to Wish List Wishlist is for registered customers. Please login or create an account to continue. Add to Compare

He was described as stupid, lazy, apathetic, immature, and a clod who was 11-years-old before he even knew how to read and write – and these are descriptions by those who have sought to improve his reputation! He was England’s King George III and to American colonists from Rhode Island to Virginia he was an ogre who neither cared about nor understood their positions – a tyrant who taxed them indiscriminately without representation. His actions and those of his ministers inspired our Founding Fathers to dispatch a Declaration of Independence to the monarch and fueled the new country’s successful fight for freedom.

Despised by his father and coddled by his mother, George III would ultimately slip into insanity – at one point he paced restlessly for 24 straight hours mumbling to himself the entire time. When his son was called to subdue the king, George tried to strangle him and had to be put in a strait jacket. He spent the last decade of his life roaming Buckingham Palace in his dressing gown. Deaf and blind, he wobbled about the halls with wild white hair and beard talking to people long since dead. But from the time he assumed the throne in 1760 as an obstinate 22-year-old until his death in 1820 as a raving lunatic, the distinctive image of “Mad King George” was prominent on coins circulating widely in America.

Now you can step back in time and hold a copper half-penny minted in England during the reign of King George III – the “Last King of America.” It’s an authentic historic treasure that likely circulated throughout the Americas before, during and after the Revolutionary War! This extremely limited coin is dated between 1760 and 1820 (date our choice), and bears a royal portrait of George III on the obverse and an image of a Seated Britannia on the reverse. Your George III Copper Half Penny will come beautifully presented in a custom display box, and will be accompanied by a certificate of authenticity and an informative story card that details its historical significance.

As you’d expect, after more than 198 years, our supply of these American Revolutionary War-era coins is extremely limited. Don’t drive yourself mad – order one for your collection while you still can!

If not for an off-putting personality and debilitating mental illness, England’s King George III may have gone down in history as a great ruler. After all, his reign did witness the final defeat of French Emperor and continental conqueror Napoleon Bonaparte. More importantly, however, the loss of the American colonies and his descent into insanity forever branded him as “Mad King George.” Act now to get your British Copper Half-Penny issued during the reign of America’s Last King. Click it to your cart today!