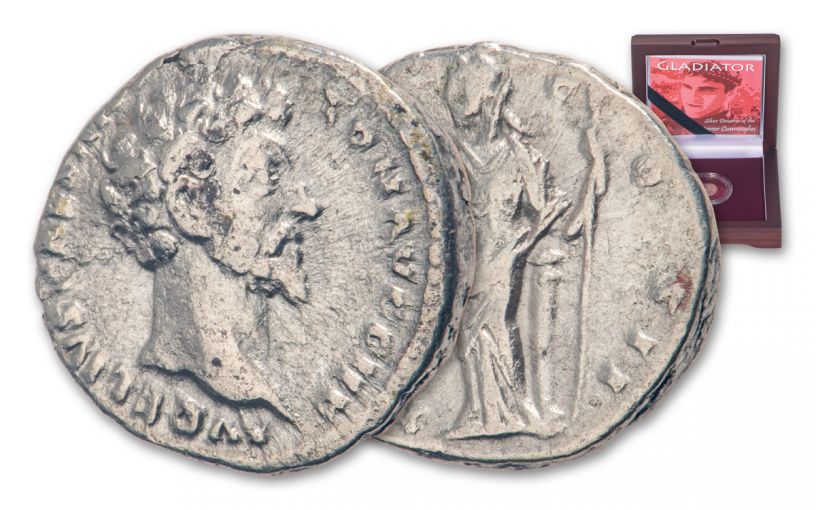 Availability: Out of Stock
This item is currently Out of Stock. Please sign up to be notified if this product becomes available.
Item #
351653
Add to Wish List Add to Wish List Wishlist is for registered customers. Please login or create an account to continue. Add to Compare

Was this Silver Denarius used to pay a Gladiator’s wage in ancient Rome? It’s certainly possible! Struck during the reign of Emperor Commodus, the Denarius was the silver dollar of its time They were used for daily purchases, as well as for the payment of wages. Elite gladiators – paid to do battle before cheering crowds in the Colosseum – often received their “paycheck” in the form of Roman silver coins.

Who knows, these coins may have even been paid to Commodus himself! That’s because Commodus was one of history’s all-time megalomaniacal dictators. Not only did he claim to be the son of Jupiter, Commodus also believed he was invincible in battle – and where else would one go to prove one’s prowess than in the arena? Probably THE biggest fan of gladiatorial combat, Commodus was so passionate in his support of the arena that he actually fought in hundreds of gladiatorial contests. Well, “fought” might be too strong a word. Nearly all of his opponents were sick, handicapped or otherwise impaired thus guaranteeing that Commodus always won. Worse still, the insane ruler charged the city of Rome the equivalent of 250,000 of these silver Denarius coins for each appearance he made in the arena!

While the brutal reign of Commodus came to a violent end with his assassination in A.D. 192, his coins live on. Each Silver Denarius in this offer features the portrait of Emperor Commodus in all his insane glory. And, since they were struck by hand, no two coins are exactly alike! Minted between A.D. 177 and 192, your coin looks incredible even after changing hands over and over again during the last 1,820 or so years! It will also come beautifully displayed in a wooden presentation case with a storycard and Certificate of Authenticity.

This is an incredible chance to obtain an 1,820-year-old coin from one of history’s most wicked rulers for under $150. How cool is that? Give this coin a “Thumbs Up!” and save it to your collection today!