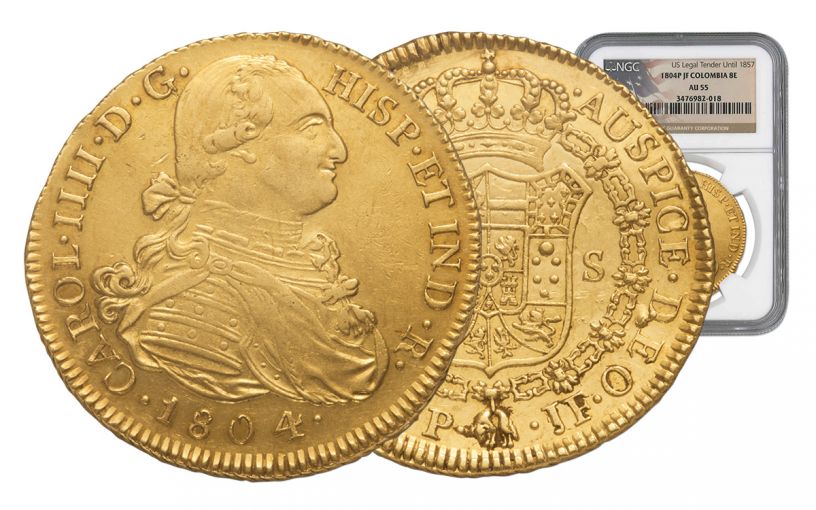 Availability: Call-In Only
This item is only available on a Call-In basis. Please call 1-800-510-6468 to speak to a representative.
Item #
303687
Add to Wish List Add to Wish List Wishlist is for registered customers. Please login or create an account to continue. Add to Compare

Together with its four golden brethren, the 1 Escudo became part of the model for American currency, serving as the forbearer to the $2.50 Gold Quarter Eagle. The Spanish 1 Escudo would remain U.S. legal tender for more than 81 years until 1857. However, in the days before the famous gold rushes of the 1800s, many 1 Escudo coins in circulation were melted down to produce U.S. coins. That's the main reason why only an estimated 1% of the original mintage is still in existence today!

Fortunately, our buyers have located a small number of 8 Escudos coins from 1772-1824 -- the years that they were highly prized in colonial and post-independence America. Order now and we'll choose a Portrait 8 Escudos from the reign of either King Carlos III (1772-1788), King Carlos IV (1788-1808) or King Ferdinand VII (1808-1824) to send directly to you. Your coin will come graded About Uncirculated (AU) by Numismatic Guaranty Corporation (NGC), sonically-sealed in an acrylic holder along with an exclusive "Legal Tender Until 1857" label. In addition, your coin will arrive in a specially crafted wood presentation case along with a Gold Escudos story booklet and checklist. We only have a few of these Gold 8 Escudos in our vault. Due to their exceptional condition, we're not expecting them to stay ours for long -- make one yours today!