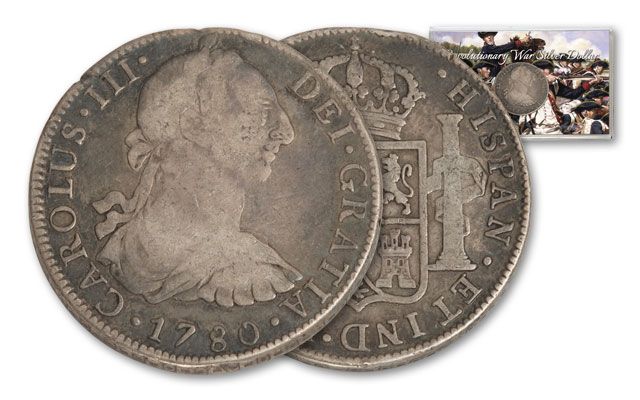 Availability: Out of Stock
Discontinued Product
Item #
270679
Add to Wish List Add to Wish List Wishlist is for registered customers. Please login or create an account to continue. Add to Compare

Many Americans do not know that the first U.S. Silver Dollar was not made until 1794, and before then our Founding Fathers had no actual U.S. coins in their pockets. Instead, they carried Spanish 8 Reales Silver Dollars, which had been in wide use for generations. This coin was the largest denomination of the Spanish silver coins circulating during the colonial era. These "Piece of Eight" coins are commonly regarded as America's first Silver Dollar. Thomas Jefferson even recommended that our new country adopt the silver Spanish milled dollar as our monetary unit of value-and it was! Each coin is over 200 years old and in Very Good to Fine (VG-F) condition; yours will come struck in Spain between 1775-1783. Don't wait to own this amazing piece of American history. Dates vary.