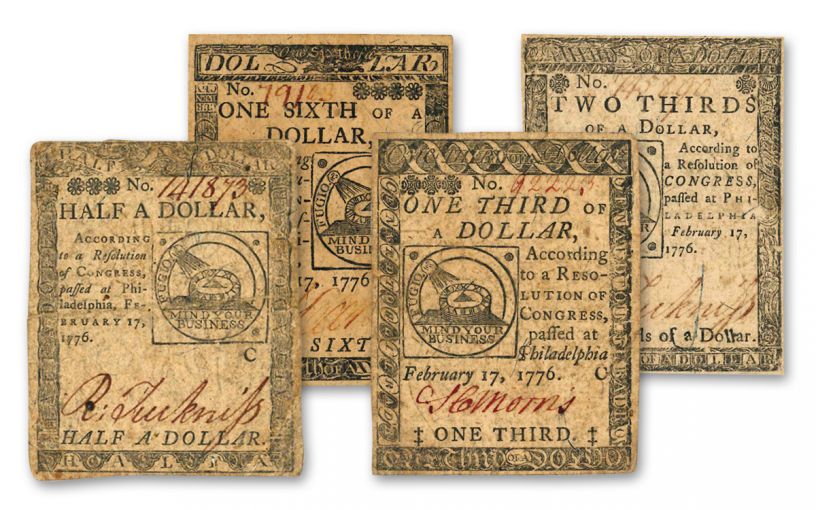 Availability: Call-In Only
This item is only available on a Call-In basis. Please call 1-800-510-6468 to speak to a representative.
Item #
336226
Add to Wish List Add to Wish List Wishlist is for registered customers. Please login or create an account to continue. Add to Compare

In 1776, our Founding Fathers signed the Declaration of Independence. A new nation was being born, and it was going to need its own money. Who better to design the notes than statesman, postmaster, inventor and Renaissance man Benjamin Franklin?

Here we’ve collected something incredibly special—a four-note set of Continental Currency Notes whose design and motto owe their existence to Franklin. And in true Franklin style, the denominations seem highly experimental—you’ll receive a $1/6 note, a $1/3 note, a half-dollar note and a $2/3 note. And you thought a $2 note was weird!

Each note was printed in 1776 on authority of the Continental Congress. A total of four million notes were authorized, with one million being these fractional notes.

The front of the note features a sundial with the Latin word “Fugio” meaning “I flee” or “I fly,” and “Mind Your Business.” Essentially, Franklin is suggesting you get on with your business, as time flies! The back of the notes displays 13 interlinked rings, each featuring the name of one of the colonies, along with the words “We Are One,” and “American Congress.” Each also features a hand-signed signature, meaning you’ll be receiving the autograph of someone involved in our independence from Great Britain!

Still in Fine condition, these 1776 notes are a national treasure any patriot would be proud to own. Secure this set for your collection today.

Designed by Founding Father Benjamin Franklin, the The 1776 Continental Fugio Benjamin Franklin Four-Note Currency Set is the first paper currency ever issued by the United States of America. They will look great in your personal collection!