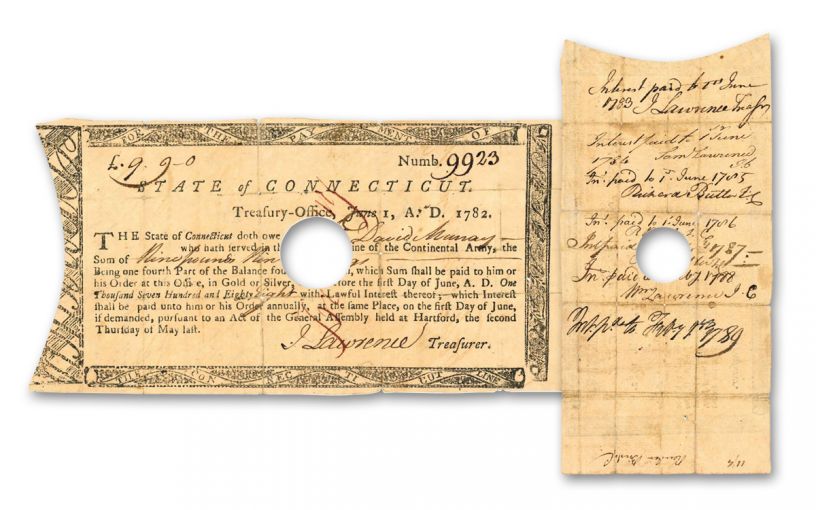 Availability: In Stock
This item will ship within 2 business days.
Item #
347828
CC Payments as low as
$99.50 / month
Add to Wish List Add to Wish List Wishlist is for registered customers. Please login or create an account to continue. Add to Compare

Soldier’s Pay from the Revolutionary War

“Buy War Bonds!” When we hear the phrase, our minds tend to drift back to the days of World War II, when movie stars would tour the country helping raise funds for the war effort. But government bonds go back much further, as proven by this authentic piece of Revolutionary War history. Dated between 1780 and 1782 – more than 235 years ago – this bond was issued to soldiers in the Connecticut Line of the Continental Army. Each was issued to a soldier who actually fought for our independence, and was payable in gold, silver or bills of credit. Each comes hand-signed by John Lawrence, Treasurer for the State of Connecticut from 1769 to 1789, complete with a cancellation hole signifying it as having been redeemed. Your note will arrive in Very Good to Fine (VG-F) condition.

Notes like these were extremely important to keeping the fledgling Continental Army afloat. The winter of 1780 in Morristown, New Jersey proved to be the harshest winter of the 18th Century and played havoc on General George Washington’s troops that spent the brutal season huddled there against the cold. The following winter saw the army dispersing into smaller units to better facilitate supplying the soldiers. For the 2,400 or so men of the Pennsylvania Line hunkered down at Jockey Hollow near Morristown in the winter of 1781, the conditions were less than deplorable. On top of that, the state of Pennsylvania had not paid its soldiers, causing a mutiny among the ranks. Offered back pay by the British if they switched allegiance, the Pennsylvanians ultimately stayed true to America and peacefully resolved the mutiny.

Can you imagine where George Washington and the Continental Army would have been had the soldiers not received bonds issued by the various states? The Revolution may have stalled in its tracks! Instead, the Army stayed afloat, and by 1781 had defeated English troops at Yorktown setting the stage for the United States and Great Britain to sign a preliminary Article of Peace in 1782. Now you can hold in your hands an actual piece of history that helped spur America on to victory in the Revolutionary War! Click one of these important pieces of history to your cart today!

Own an actual piece of history that helped America win the Revolutionary War with this Connecticut Bond for the Continental Army. Patriotic, historic and 100% American – it’s an incredible artifact that you’ll be proud to own and display!