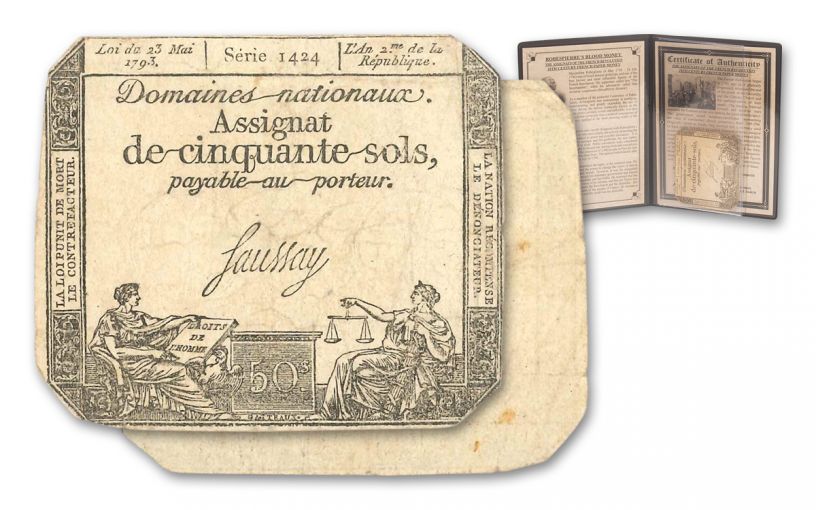 Availability: In Stock
This item will ship within 2 business days.
Item #
333505
Add to Wish List Add to Wish List Wishlist is for registered customers. Please login or create an account to continue. Add to Compare

Issued between 1789 and 1796, during the height of the French Revolution, this Assignat note was technically a bond backed by confiscated Church properties. However, the French still used them as legal tender. This was during the infamous “Reign of Terror” in France that was so poignantly described in Charles Dickens’ famous historical novel “A Tale of Two Cities.”

The architect of the French Revolution's Reign of Terror was Maximilien de Robespierre, the leading member of the Committee of Public Safety. Robespierre launched a purge in late 1793 to eradicate those he and his cronies deemed as “enemies of the Revolution.” The enemies turned out to be anyone who opposed Robespierre’s political views. Even people who were neutral on the issues risked arrest and execution if Robespierre viewed them as enemies. The committee had become France’s de facto war-time government by 1793 and Robespierre’s purge attempted to maintain law and order by using violence as an instrument of government. The newly invented guillotine became a symbol of the Revolution, and 30,000 people lost their lives before Robespierre’s insidious government was toppled in the summer of 1794. A day after his arrest, Robespierre was guillotined by a mob, bringing his reign of terror to an ignoble and fitting end.

This note comes in slightly circulated Fine to Very Fine condition with all the original detail on the front still visible.  The images are allegorical symbols of the French Revolution, which served the dual purpose of being currency and propaganda. Dates and denomination vary and each note may be slightly different given the different denominations available.  Your note will also come beautifully packaged in a display folder with a storycard and certificate of authenticity that tells the grisly tale of Robespierre’s Reign of Terror.