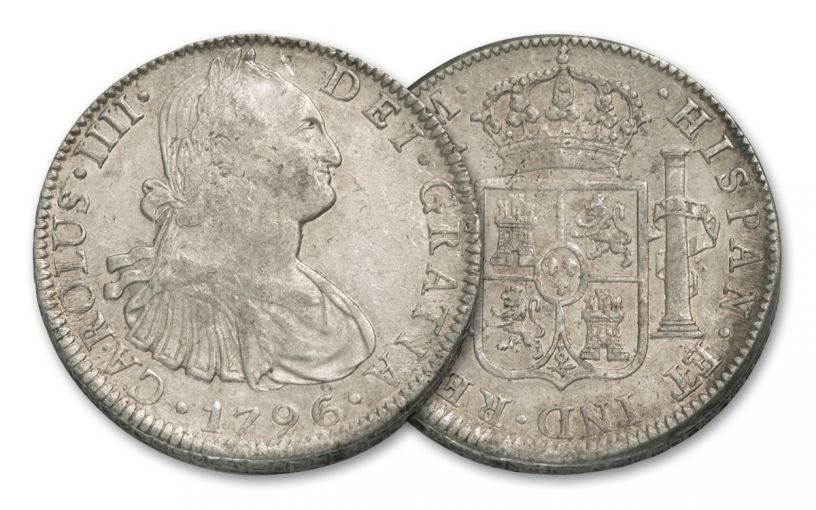 Availability: In Stock
This item will ship within 2 business days.
Item #
303715
CC Payments as low as
$124.50 / month
Add to Wish List Add to Wish List Wishlist is for registered customers. Please login or create an account to continue. Add to Compare

Well before the United States struck its own coinage in mass quantities, the Spanish 8 Silver Reales coin was effectively considered to be America's first silver dollar. As one of the most commonly used coins of the post-Revolutionary era, it helped fuel the early years of a new nation – whether to buy goods and services to assist homesteading families or aid in the payment to soldiers who fought in the Revolutionary War. This coin maintained its popularity well into the 1850s, forming the backbone of the economy as trade and commerce exploded across the country.

After being granted legal tender status by the Second Continental Congress in 1776, a status which was reinforced by the Coinage Act of 1793, these coins remained in circulation until 1857. Adding to these coins’ collectability is the fact they are dated between 1789 and 1797, the years George Washington was the first president of the United States! Your coin will come in Fine condition. Date our choice.

Add this historic coin to your collection just by clicking it to your cart!

No historical collection should be without the coins that helped usher in a new age of freedom for America, and your 1789-1797 Silver 8 Reales Fine coin is available for you now at GovMint.com. Call us today to secure yours!