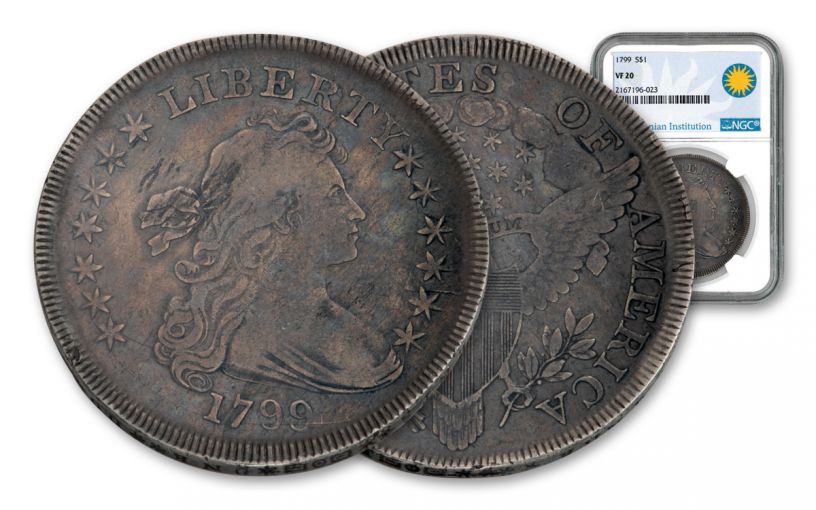 Availability: Out of Stock
This item is currently Out of Stock. Please sign up to be notified if this product becomes available.
Item #
285127
Add to Wish List Add to Wish List Wishlist is for registered customers. Please login or create an account to continue. Add to Compare

The very first Chief Engraver of the United States Mint was Robert Scot, appointed by then Secretary of State Thomas Jefferson in 1793. During the American Revolution, Scot had been an engraver of paper money, but he made his true mark on the collecting world when he created the Draped Bust Silver Dollar, featuring Liberty with long, flowing hair on the obverse and a heraldic eagle on the reverse.

As beautiful as this design is, it also gained some criticism. Scot placed the arrows in the eagle’s right talon, which symbolized militarism, rather than the traditional image of the arrows in the left talon and the olive branch of peace in the right. However, when this coin was struck in 1799 the United States was engaged in the Quasi-War against France, leaving some to speculate that the change was intentional on Scot’s part.

This wonderful example of a turn-of-the-century U.S. Silver Dollar comes certified by the Numismatic Guaranty Corporation (NGC) as being in Very Fine-20 (VF20) condition, sealed with Smithsonian® Coin Classics label.

Get a piece of American history with this Draped Bust Silver Dollar!