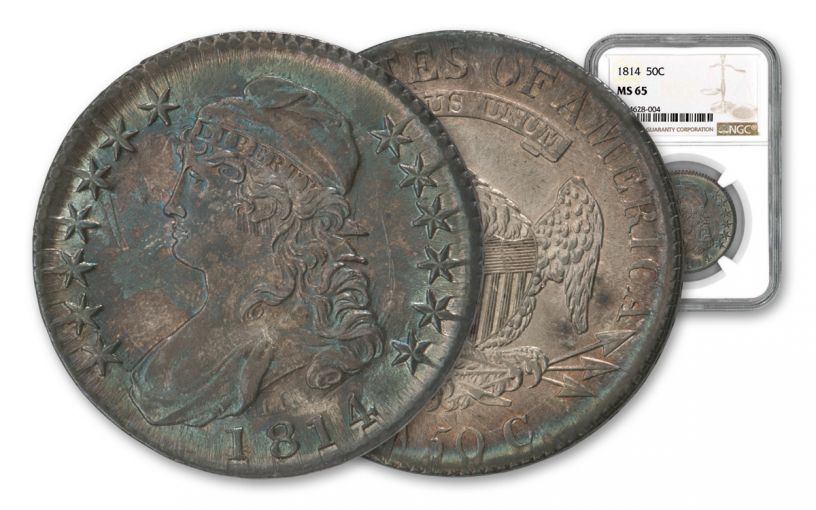 Availability: Call-In Only
This item is only available on a Call-In basis. Please call 1-800-510-6468 to speak to a representative.
Item #
332090
Add to Wish List Add to Wish List Wishlist is for registered customers. Please login or create an account to continue. Add to Compare

Better Than the Smithsonian’s

How would you like to own an important piece of American history that’s seven grades higher than the version currently in the Smithsonian’s® Numismatic Collection? This 1814 Silver Liberty Bust Half Dollar circulated during the War of 1812, and was struck the same year Francis Scott Key wrote “The Star Spangled Banner” after watching the British bomb Fort McHenry for more than 24 hours. It’s been around for more than 200 years, and somehow managed to survive in Mint State-65 (MS65) condition! You’d be hard-pressed to find one in finer condition. In fact, only 17 coins exist in better condition graded by either the Numismatic Guaranty Corporation (NGC) or the Professional Coin Grading Service (PCGS). Best of all, this exquisite coin – which is one of the few that has been graded and certified by NGC – features outstanding mint green toning, which enhances the sharpness of the strike. If you’re looking for a historic U.S. coin with a massive amount of “wow factor,” this is that coin! Do not pass this historic treasure by!