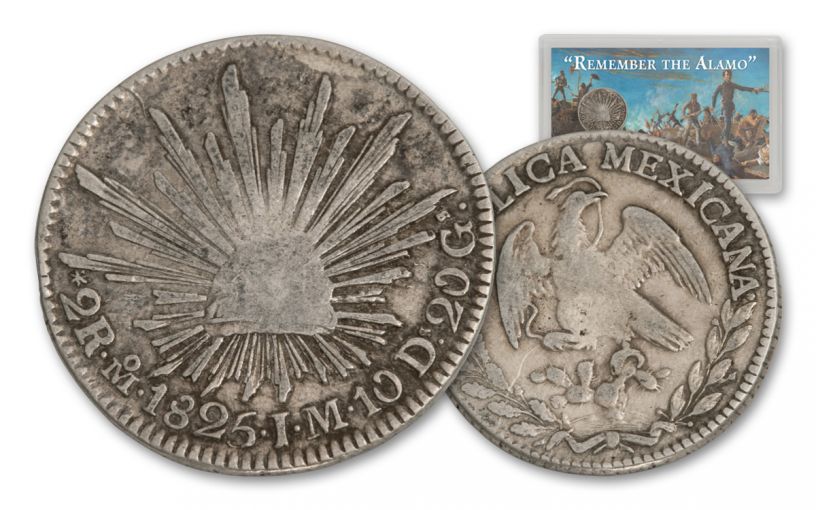 Availability: In Stock
This item will ship within 2 business days.
Item #
268890
Add to Wish List Add to Wish List Wishlist is for registered customers. Please login or create an account to continue. Add to Compare

After failing to be re-elected to the United States House of Representatives, Davy Crockett famously told his home state of Tennessee that “You may all go to hell and I will go to Texas!” True to his word, Crockett arrived in Texas in early 1836 just in time to join the Texas Revolution. One of America’s most famous folk heroes, Crocket was a noted frontiersman whose name lent instant credibility to the fledging young Republic of Texas. Once there, he undoubtedly swapped stories and tall tales with adoring fans and used pocket change like these Mexican 2 Reales coins to pay for drinks, meals and other ancillary needs.

Known as “Cap & Rays” coins, these distinctive 2 Reales were struck at Mexico’s Mint, the famous Casa de Moneda, the oldest mint in the New World. While the coin’s obverse features Mexico’s national emblem of an eagle holding a snake in its beak, it’s the reverse where the name stems from as it depicts a Liberty Cap with sun rays bursting forth from it. Inscribed in the rim of the cap is the word LIBERTAD. Mexican silver coins like this were accepted as legal tender in the United States up until the Civil War. And when the Republic of Texas declared its independence from Mexico in 1835, it meant that these coins were legal tender in THREE sovereign nations until Texas was annexed by the United States as the 28th state in 1845.

Mexico minted the historic 2 Reales Cap & Rays from 1825-1872. Each was struck in 6.76 grams of highly pure 90.3% fine silver and is slightly larger than a modern-day quarter. The coins we have in this offer were struck between 1825-1836 up until the famous Battle of the Alamo near San Antonio. Crockett was reported to have been one of the last men standing at the Alamo as the small garrison of about 185 Texans was overwhelmed by a force of around 4,000 commanded by President General Antonio López de Santa Anna.

It’s not something you think about every day, but this is the perfect chance to own a coin commonly used when Davy Crockett fought at the Battle of the Alamo more than 180 years ago. Unfortunately, many were melted down. Here’s you chance to get one of these marvelous coins. Each will come in Fine (F) condition and housed in an Alamo-themed holder ready for your collection. Dates vary.

Remember the Alamo – and remember to add this historic coin to your cart!