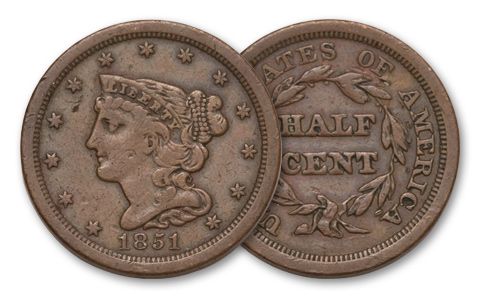 Availability: Out of Stock
This item is currently Out of Stock. Please sign up to be notified if this product becomes available.
Item #
182468
Add to Wish List Add to Wish List Wishlist is for registered customers. Please login or create an account to continue. Add to Compare

The Last Half Cents Ever Struck

Copper coins were a mainstay for the economy of Colonial America where they were minted in both official and unofficial capacities. It’s no wonder that when the U.S. Mint was established to strike the nation’s coins that the first coins issued in 1793 were copper half cents. Not only was the copper half cent the first coin struck for circulation, it was – and still is – the smallest denomination U.S. coin ever!

As the name implies, the Half Cent is exactly half the weight of the Large Cent and the coins have the same basic design. The last Half Cent variety is the Braided Hair design struck from 1840 to 1857. Despite its small size, the image of Miss Liberty as designed by Mint Engraver Christian Gobrecht lends a certain simple dignity to the nation’s lowest denomination coin. Only a little more than a half million Braided Hair Half Cents were ever struck, making this design one of the toughest U.S. coins to find – and the prize piece of many collections.

In an odd set of circumstances, this coin almost wasn’t the last Half Cent denomination ever struck. In 1912, a bill introduced by Ohio Representative Robert J. Bulkley that would have created new Half Cent and Three Cent pieces was passed by the House of Representatives. It never made it past the Senate, however, and those denominations have never been seriously considered since.

Don’t miss your chance – get your Braided Hair Half Cent now in Very Fine (VF) condition! Dates will vary between 1849-1857.