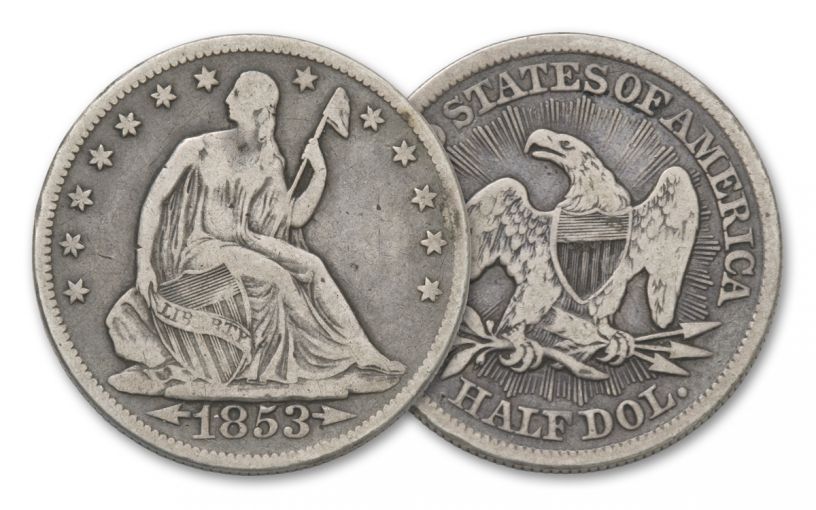 Availability: In Stock
This item will ship within 2 business days.
Item #
235668
Add to Wish List Add to Wish List Wishlist is for registered customers. Please login or create an account to continue. Add to Compare
Recommended Products
Product Description

Hidden Away During the Civil War

Millions of Seated Liberty Half Dollars were struck between 1839 and 1891. Yet today they’re one of the toughest-to-find vintage 19th century coins. Why? Ironically, the discovery of gold in California in 1848 caused their silver values to rise, and those millions of half dollars being churned out by the mint every year were snapped up by profiteers and sent to the West Indies where they were melted to get their silver! We're excited to have found some of these big silver coins and we’re proud to make them available here. But they'll go fast -- and not to Jamaica this time, but to modern day collectors!

Your Half Dollar will come struck at the storied New Orleans Mint -- the only American mint to be controlled by three different governing bodies during its lifetime. It was first governed by the United States of America, then the State of Louisiana when it seceded from the Union prior to the Civil, and finally the Confederate States of America following in the onset of the war. The United States regained possession in 1862.

Each O-Mint Seated Liberty 50-cent coin contains 90% silver, and comes in Fine condition. They were all struck with the famous “O” mint mark from 1843 to 1861 in the years leading up to the Civil War. With the widespread silver melt downs and the desperate need for accepted forms of currency by citizens ravaged by years of war, it’s a miracle any of these coins survived today. History has a way of repeating itself so get your piece of history now before modern collectors snap them all up!