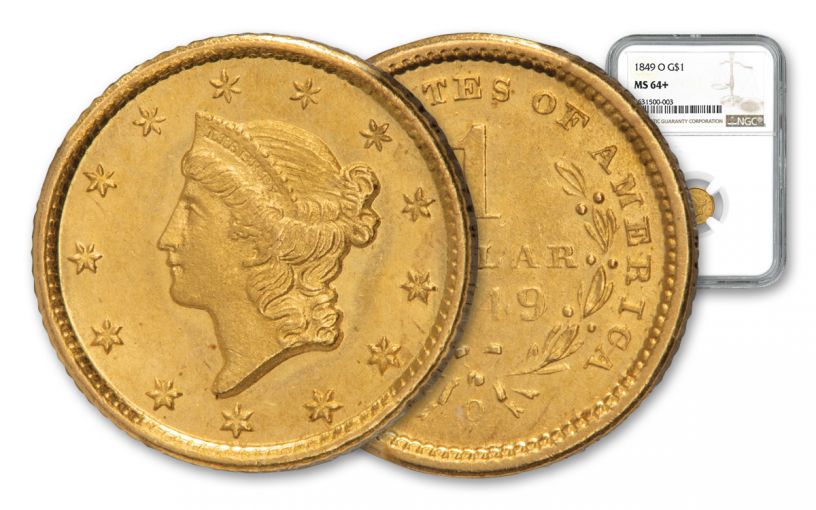 Availability: In Stock
This item will ship within 2 business days.
Item #
349030
CC Payments as low as
$3,248.75 / month
Add to Wish List Add to Wish List Wishlist is for registered customers. Please login or create an account to continue. Add to Compare

Prior to 1849 the United Sates Mint did not strike gold dollars because there wasn’t enough gold available to do so. After gold was discovered in California in 1848, the precious metal began flowing into the mint in quantities enough for the mint to strike its first gold dollar. This $1 Gold Liberty Head gold dollar struck in 1849 represents the first-year Type 1 Gold Liberty Dollar.

As anyone knows, the first year of a series is always important for any collector, and this first-year Type 1 Gold Liberty Dollar is an incredible find. These small gold coins were never struck in large quantities, which by itself would certainly make them scarce today, more than 170 years later. But their small size and the fact that they were used in daily commerce meant many were lost or simply wore out. Here’s a great opportunity to add this historically significant California Gold Rush coin to your collection!

Struck at the historic New Orleans Mint in highly pure 90% fine gold, this coin comes certified and graded by the Numismatic Guaranty Corporation (NGC) as being in blazing Choice Uncirculated Mint State-64 condition with a special “plus” designation (MS64+) that signifies its exceptional state and places it just a hair under being a Gem Uncirculated MS65 graded specimen.

The obverse displays Liberty facing left, surrounded by 13 stars to represent the 13 original colonies. The reverse displays the coin’s $1 denomination and date within a wreath, with the “O” mintmark given a prominent position — bottom and center of the design.

The original mintage of this coin was a relatively small 215,000. NGC has graded only 784 coins, with just 16 grading higher. The Professional Coin Grading Service (PCGS) has graded only 482, with just 9 graded higher. To give you a better idea of how amazing this condition is, consider for a moment that the National Numismatic Collection at the Smithsonian® in Washington, D.C. has one of these key-date coins in its collection — and that specimen is graded in just M61 condition!

These popular gold coins are becoming harder and harder to find every year, so don’t wait. By securing yours today, you can avoid future disappointment and the uncertainty of future supplies and prices. We have just one available, so hurry and add it to your collection now.

THE FIRST UNITED STATES GOLD DOLLAR – Designed by James Barton Longacre (1794–1869), the 4th Chief Engraver at the United States Mint and one of the most celebrated and prolific coin designers in U.S. Mint history, this is the first Gold Dollar ever struck by the U.S. Mint

STRUCK IN HIGHLY PURE GOLD – This coin was struck in 1.672 grams of highly pure 90% fine gold from the California Gold Rush. And measures 13 mm in diameter.

UNITED STATES LEGAL TENDER – The $1 Gold Liberty was a very important coin of commerce. Throughout the 19th century, the United States was on the gold standard, and gold coins were thought of as real “money.”

FANTASTIC HIGH-GRADE CONDITION – Your 1849-O Type 1 Gold Liberty Dollar has been graded by the Numismatic Guaranty Corporation (NGC) in Choice Uncirculated Mint State-64 condition with a special “plus” designation (MS64+) that signifies its exceptional state and places it just under a Gem Uncirculated MS65 grade.

SCARCE LOW MINTAGE COIN – The original mintage of this coin was only 215,000. NGC has graded only 784 coins, with just 16 grading higher than the coin available in this offer.

There were no plans for a $1 gold coin when America’s coinage system was originally designed. But thanks to the California Gold Rush, those plans were scraped as Congress looked to expand the use of gold in the country’s currency. Now you can make plans to add tis first-ever gold dollar to your collection — but only if you act now! Secure this important coin right now before someone else beats you to it!