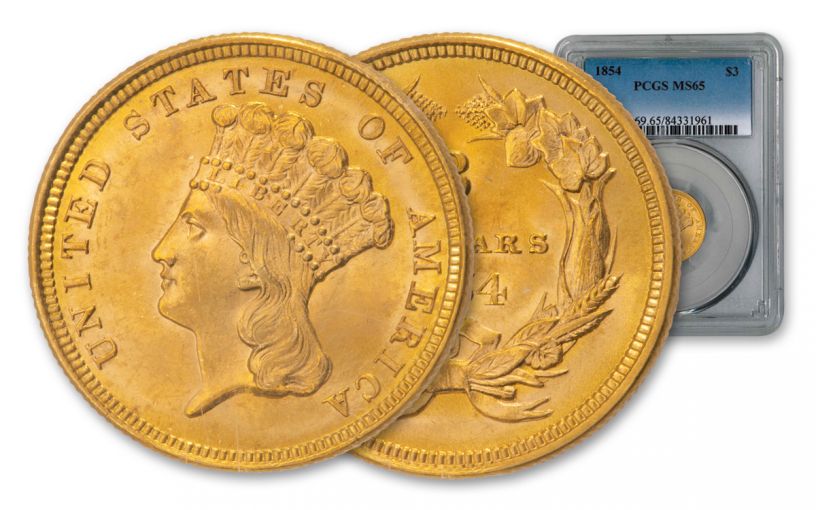 Availability: In Stock
This item will ship within 2 business days.
Item #
313258
Review this product
CC Payments as low as
$5,750.00 / month
Add to Wish List Add to Wish List Wishlist is for registered customers. Please login or create an account to continue. Add to Compare
Complete your collection with one of these:
Product Description

The $3 Indian Princess Gold Piece is renowned by collectors as the most beautiful gold coin struck by the U.S. Mint in the 19th century. But, exactly why the coin was made is a mystery today. And, even back when it was authorized by Congress no reason to make it was given. While the California Gold Rush prompted the creation of new U.S. gold coins, speculation about this coin’s origin is related to the U.S. Post Office, which at about this same time had reduced the first class mail rate to 3 cents. Therefore it is assumed by many coin experts that this coin was created so people could purchase a sheet of 100 First Class stamps.

Regardless of the reason, the $3 Gold Indian Princess was never struck in large quantities, and has been scarce and desirable ever since the minting ended in 1889. Designed by U.S. Mint Chief Engraver James B. Longacre, the coin shows a gorgeous Indian Princess wearing a pom-pom feathered headdress, with the date and denomination enclosed within a "fruits of the land" wreath.

This first-year 1854 Gold Indian Princess looks as good as the day it was struck 164 years ago! This is an incredible find, as it’s estimated by U.S. gold coin expert Jeff Garrett that only 10% of all vintage U.S. gold still exists today. And yet, this coin has been graded by the Professional Coin Grading Service (PCGS) as being in beautiful Mint State-65 (MS65) condition.

These coins were struck only from 1854 until 1889 – a relatively short life for a U.S. coin denomination. And when the United States went off the gold standard in the 1930s, many were lost to the melting pot. In fact, many collectors today don’t even know that a $3 gold coin even existed! But here it is, ready for your collection.

Of the 138,618 struck that first year of 1854, this coin is the only one our experts have managed to secure certified by PCGS as being in MS65 condition. Here’s your chance to get a first-year-of-issue 1854-P $3 Gold Indian Princess in Mint State-65 condition – a grade two whole grades higher than that of the same coin in the Smithsonian’s collection! Add it to your cart right now!

Competition for this first-year gem is going to be fierce, so what are you waiting for? Order now!