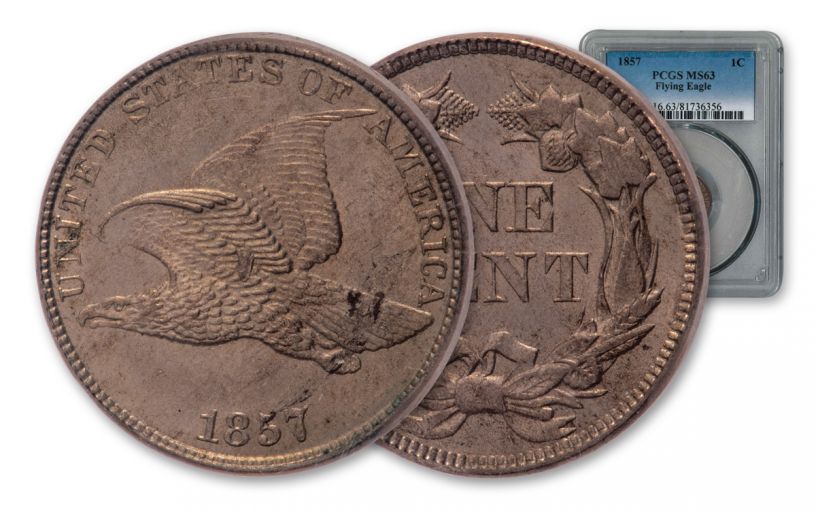 Availability: Call-In Only
This item is only available on a Call-In basis. Please call 1-800-510-6468 to speak to a representative.
Item #
299851
Add to Wish List Add to Wish List Wishlist is for registered customers. Please login or create an account to continue. Add to Compare

Struck in 1857, the Flying Eagle cent was the work of James Barton Longacre, who was appointed as Chief Engraver of the U.S. Mint on Sept. 16, 1844 after the death of his predecessor, Christian Gobrecht. Longacre himself created most of the new pattern designs during his time as Chief Engraver, though he is said to have leaned heavily on the work of his predecessor – especially in his creation of the Flying Eagle.

During the second half of the 1850s, the continued striking of large cents by the U.S. Mint became impractical. The mint was paying more for the copper to strike the coins than their face value. Merchants were buying them by the barrel and melting them down for a quick profit. The mint devised a solution in 1856 with the creation of the Flying Eagle Cent. Struck from copper nickel, it was the first of the “small cents” – the same size that is used by the mint for pennies today. The Flying Eagle Cent proved to be very popular when it was first released for circulation on May 25, 1857, with more than a thousand people lined up around the Philadelphia Mint to get them.

Today, the Flying Eagle Cent is considered by many to be the most attractive cent ever minted, showing a flying eagle on the obverse and a “Nature's Bounty” wreath on the reverse that encloses the denomination. However, the Flying Eagle Cent is the shortest-lived denomination of all cents. The design was only struck for three years – several hundred pattern coins in 1856 and for circulation in 1857 & 1858. These elusive first U.S. copper-nickel coins are still coveted by collectors for their classic eagle design.

However, you won’t have to look hard to notice that something is certainly off about the design on this Flying Eagle Cent. That’s because it’s an MPD (Misplaced Date) coin known as a Snow-16 variety as described by award-winning author and numismatist Richard Snow in his book A Guide Book of Flying Eagle and Indian Head Cents. Rather than striking the date at the bottom of the design, it features a “die cud” or raised bump, over the eagle’s center left wing, where the date has been punched into the eagle’s neck and chest area twice!

It’s a major error on the part of the U.S. Mint, but that also makes this important piece of U.S. history even more fascinating – especially when you can secure it certified and graded by the Professional Coin Grading Service (PCGS) as being in Mint State-63 (MS63) condition! This coin has it all – scarcity, history, short series, a beautiful design…. and more! What are you waiting for; click it to your cart before someone else snags it!