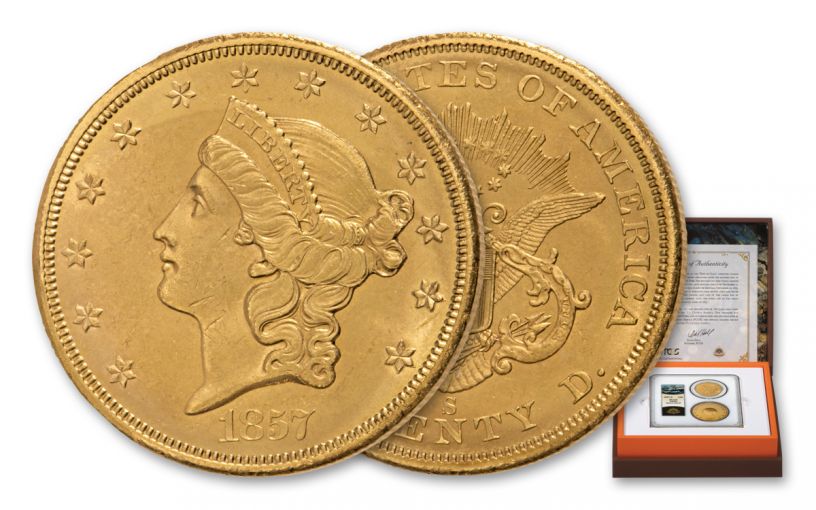 Availability: Out of Stock
This item is currently Out of Stock. Please sign up to be notified if this product becomes available.
Item #
333601
Add to Wish List Add to Wish List Wishlist is for registered customers. Please login or create an account to continue. Add to Compare

In September of 1857, the SS Central America was on its way to deliver mint-fresh $20 Gold Liberty Double Eagles from the San Francisco Mint to the U.S. Treasury vaults in Washington, D.C. Fate, however, had other plans.

The Central America was caught in a hurricane 160 miles East of Cape Hatteras, North Carolina. Her crew did the best they could, but on September 12, 1857 the ship went down, taking with her 426 passengers and crew. Thousands of gold and silver coins now sat 8,500 feet below the waves at the bottom of the Atlantic.

Eventually, those coins were recovered, and thanks to gold’s resistance to the effects of salt water, you can now take home beautiful collector-grade 1857-S $20 Gold Liberties from this famous shipwreck! Bring home this beautiful coin graded by the Professional Coin Grading Service (PCGS) as being in outstanding Mint State-63 (MS63) condition. Your coin will come presented in a large-format holder along with an incredible bonus: a gold proof containing a real pinch of California gold dust!

Demand for these new pieces is incredibly high, and we don’t expect to hang on to them for long. Get yours before they’re completely sold out.

Own an actual coin from the famous S.S. Central America shipwreck! Your 1857-S Liberty Head Gold Double Eagle was struck from California Gold Rush Gold! Add it to your cart today!