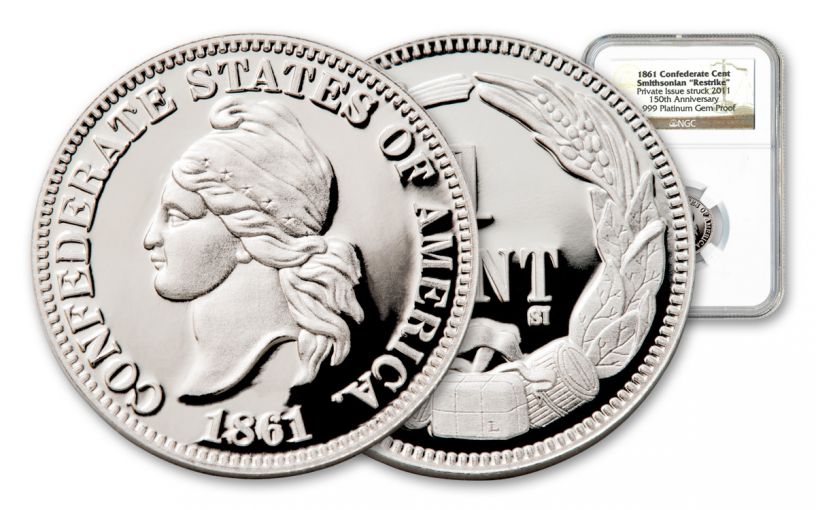 Availability: In Stock
This item will ship within 2 business days.
Item #
225899
CC Payments as low as
$298.75 / month
Add to Wish List Add to Wish List Wishlist is for registered customers. Please login or create an account to continue. Add to Compare

The Philadelphia Penny that Almost Served the Confederacy

In 1861, the Civil War was just underway. After seizing the New Orleans Mint, the Southern Confederacy sent agents north on a secret mission to seek out someone who would design a new one-cent coin for the Confederacy. They found a Philadelphia coin engraver named Robert Lovett Jr. and offered him a commission to design the coin. Lovett agreed and even struck about a dozen specimens before he got cold feet. Nervous of being discovered, arrested and jailed for treason; Lovett hid the dies for his Confederate Cent in his cellar where they remained concealed until 1873! Eventually, his original dies were turned over to the Smithsonian® and in 2011, to mark the 150th Anniversary of the Civil War, the Smithsonian officially authorized the striking of this 1861 Platinum Confederate Cent based on the original dies!

Minted in one quarter ounce of highly pure 99.9% platinum, the restrike features Lovett’s elegant design depicting Liberty facing left wearing a Liberty Cap and surrounded by the words: CONFEDERATE STATES OF AMERICA and the 1861 year date. The reverse shows a wreath of corn, cotton, maple, tobacco & wheat along with two barrels and a bale of cotton – all important staples for the Southern economy.

As a testament to the production quality that went into recreating this superb piece of American Civil War history, your 1861 Quarter-Ounce Platinum Confederate Cent has been graded by the Numismatic Guaranty Corporation (NGC) to be in Gem Proof condition, meaning it was expertly crafted from hand-selected planchets, polished dies and multiple strikes to produce beautifully frosted details rising over mirror-like fields. It will also come sonically sealed in an acrylic holder and encapsulated with an NGC label bearing the prestigious Smithsonian pedigree.

Hurry, only a small number of these historic restrikes are available at this time.