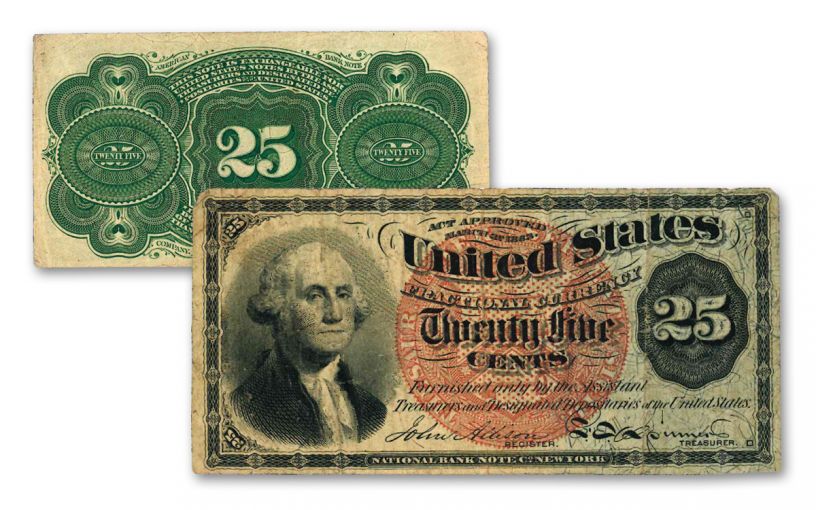 Availability: Out of Stock
This item is currently Out of Stock. Please sign up to be notified if this product becomes available.
Item #
343112
Add to Wish List Add to Wish List Wishlist is for registered customers. Please login or create an account to continue. Add to Compare

When the American Civil War first broke out in 1861, circulating coinage virtually disappeared. People fearful of the war’s outcome were hoarding their coins, keeping the precious silver and gold hidden away from a potential invading army. In order to make up for this shortage, the United States of America, under the leadership of President Lincoln, began issuing fractional currency notes, like this 25 Cents Note issued in 1863 – the same year as the pivotal Battle of Gettysburg. It features a portrait of President George Washington beside a large red seal. The reverse displays an ornate design in green.

The government’s fractional currency notes were issued only from 1862 until 1876. Variously referred to as “paper coins” and “postage currency,” they were smaller than regular currency notes and they did not have serial numbers. While many were saved as mementos due to their curious size and denominations, many more were destroyed by the wear and tear of time and commerce. Don’t miss the chance to secure yours now in Fine to Very Fine (F-VF) condition.

A piece of paper currency with a denomination of only 25 cents? It’s true! Add one of these fascinating and historic 1863 25 Cents Fractional Currency Notes to your collection today!