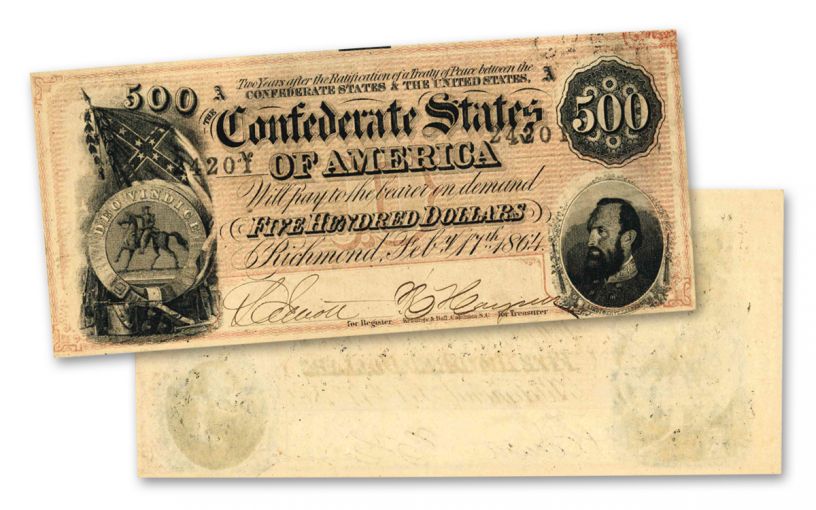 Availability: Call-In Only
This item is only available on a Call-In basis. Please call 1-800-510-6468 to speak to a representative.
Item #
339373
Add to Wish List Add to Wish List Wishlist is for registered customers. Please login or create an account to continue. Add to Compare
Recommended Products
Product Description

The Only Confederate Note to Display the “Stainless Banner”

The largest denomination bank note issued for circulation by the Confederate States of America, this $500 note is also the only piece of paper currency to feature the second Confederate Flag, known as the “Stainless Banner.” The note was issued in 1864 to honor General Thomas “Stonewall” Jackson, one of the most beloved Southern commanders of the Civil War. Jackson was accidentally shot by his own men during the battle of Chancellorsville in 1863 and died a few days later. Prior to his death, Jackson’s left arm was amputated, prompting General Robert E Lee to utter the famous words: “He has lost his left arm, but I my right.”

This 1864 CSA Stonewall Jackson$500 Note comes graded in in Crisp Uncirculated (CU) condition, meaning it was tucked away for safekeeping and escaped destruction after many of these notes were destroyed by disillusioned Southerners after the Civil War. Its crisp condition also means that it will have no folds or creases and will look perfect in any paper currency collection. Your note will come displayed in a clear archival holder and accompanied by a certificate of authenticity

Like the Kennedy Half-Dollar released 100 years later to honor the assassinated President, this note was quickly issued to honor one of the South’s most popular leaders. Despite its high $500 denomination, however, this note was symbolic of the Confederacy’s fading fortunes in 1864. By this time, Lee was bottled up in Richmond and Union General William Tecumseh Sherman had begun his march to Atlanta. Nowhere does this note reflect the “Lost Cause” of the South more than on its back where it is blank. The reason? All the back plates for the 1864 series had been captured and no replacements were made in time for this note’s release. Printed in glorious shades of pink and red, could it be that this note’s red ink was a precursor to the phrase, “drowning in red ink?”

The second Confederate flag used the well-known original battle flag and placed it in the upper left corner of the banner against a field of pure stainless white. One of the first times the new Stainless Banner was used was when it was draped across the coffin of Stonewall Jackson as his body lay in state in the capitol in Richmond on May 12, 1963.

With their high dollar denomination, high-grade condition, and one-of-a-kind Civil War-era history; it will not take long for these 1864 CSA $500 Stonewall Jackson Notes to march out of here. Make one part of your collection today!