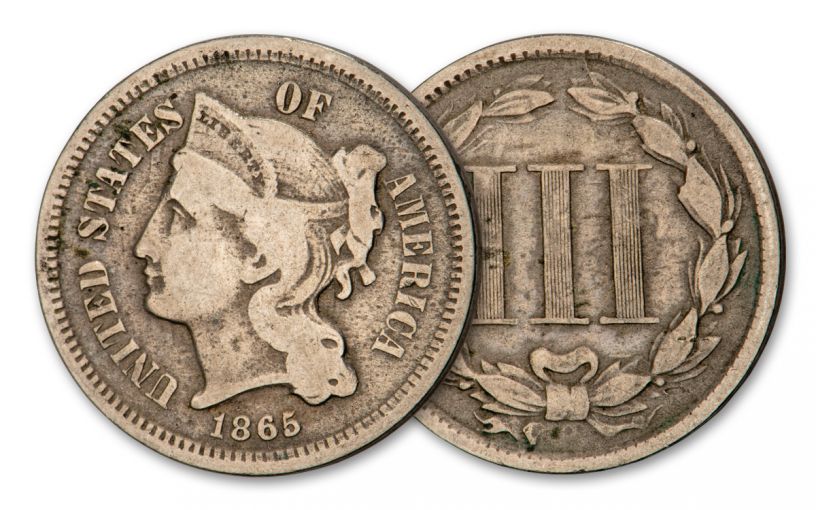 Availability: In Stock
Discontinued Product
Item #
228761
Add to Wish List Add to Wish List Wishlist is for registered customers. Please login or create an account to continue. Add to Compare

In the final year of the Civil War, General Robert E. Lee surrendered to General U.S. Grant at Appomattox. The Confederacy was officially dissolved, President Lincoln was assassinated by John Wilkes Booth, and the tortuous pangs of Reconstruction began. 1865 changed the fortunes of Americans in both the North and the South. And now you can own a unique U.S. coin that actually circulated during that turbulent year: an authentic Three Cent Nickel!

An earlier silver three-cent piece had been issued in 1851, but because is was struck in 75% silver, it became a prized possession during the war as citizens hoarded them for their precious metal. To keep the economy moving, the U.S. Mint released another three-cent piece — only this one was struck in nickel-plated copper. Designed by James Longacre, fourth Chief Engraver of the U.S. Mint, the Three-Cent Nickel saw production until 1889. Today, many collectors aren’t even aware that this coin was ever even struck!

In 2020, as America marks the 155th Anniversary of the conflict’s end, vintage Civil War issues like these are in high demand, making it difficult to obtain large quantities of the coins in this collection. This is your chance to secure a first-year 1865 Three-Cent Nickel still in nice Fine (F) condition. What’s more, It will come displayed in a deluxe presentation case along with a storybook on Civil War-era money.

Acquiring this genuine coin from that historic American era just makes good “cents.” But with only a limited supply available, you’ll need to secure yours now before they’re all gone!