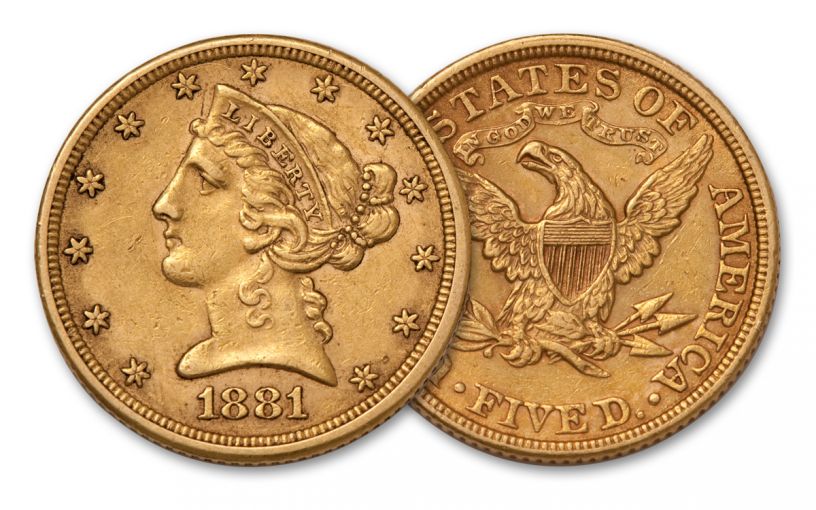 Availability: In Stock
This item will ship within 2 business days.
Item #
224790
Review this product
CC Payments as low as
$239.50 / month
Add to Wish List Add to Wish List Wishlist is for registered customers. Please login or create an account to continue. Add to Compare
Complete your collection with one of these:
Product Description

In God We Trust – All Others Pay Cash!

During the bloody carnage of America’s Civil War, there was a move afoot at the U.S. Treasury Department to make sure the motto “In God We Trust” was added to America’s coins. Some people interpreted it as a nod to finding purpose in the sacrifice of so many at the Altar of Freedom. For others, it was the Federal Government’s way of saying that God was on the Union side. Whatever the real reason, when the motto was added to coins it did not escape the eagle-eyed notice of Americans, prompting someone to quip: “In God We Trust – all others pay cash!”

In 1866, the U.S. Mint added the motto to its $5 Gold Liberty Half Eagles and the motto remained on the coin until 1908 when the $5 Gold Liberty series ended.  These coins were cold hard cash for many Americans. The $5 Gold Liberty series was first struck in 1839, and from the moment these coins first entered circulation, they served to fuel of business across the country. This workhorse coin of commerce had the perfect balance of its time – a large enough denomination for most day-to-day transactions, yet small enough for merchants to easily make change. Imagine a coin with the same ubiquity and utility as today's $20 bill, and you pretty much get the idea!

Of course, popularity in circulation can be a bad sign for a coin's longevity. Even though these $5 coins were minted in large quantities, their constant use combined with the gold recall of 1933 reduced their numbers significantly. It's especially difficult to find one in highly-graded condition today. Fortunately, you don't have to look any further! Now you can secure yours in Extremely Fine (XF) condition. Dates vary.

The $5 Liberty Heads available in this offer are dated from 1866-1908 and will have the "IN GOD WE TRUST" motto emblazoned on a ribbon above the eagle. Your $5 legal-tender Gold Liberty Head will come sonically-sealed in an acrylic holder, giving you the best in protection while providing unobstructed views to every gorgeous detail. These $5 Gold Liberty Heads have survived for over a century – don't let them disappear from your sight now!

Collectors love American gold coins, and the unique design and history behind these $5 Gold Liberty coins dated 1866-1908 makes this coin even more desirable. Get yours today!