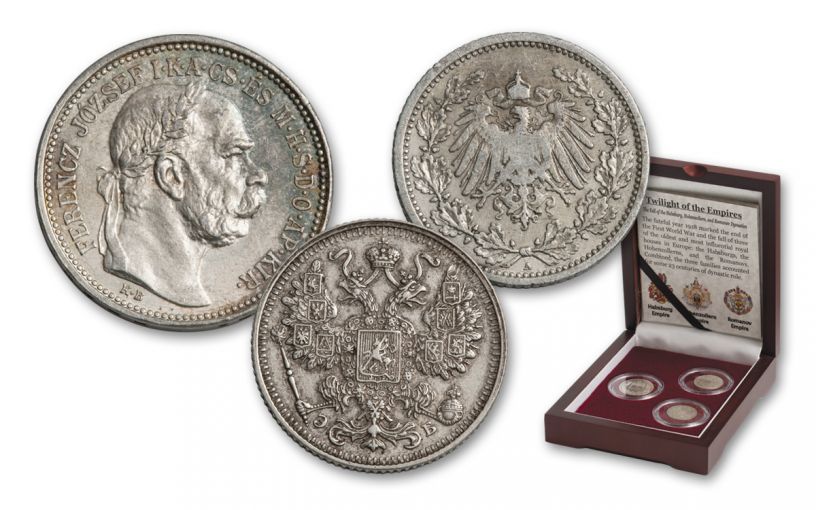 Availability: In Stock
This item will ship within 2 business days.
Item #
246764
Add to Wish List Add to Wish List Wishlist is for registered customers. Please login or create an account to continue. Add to Compare

World War I did more to redraw the map of Europe than any other event. Before the war started, three vast empires dominated Central and Eastern Europe: the Hohenzollerns in Germany, the Hapsburgs in Austria-Hungary and the Romanovs in Russia. By the end of the war, all three had vanished like dust in the wind.

This Twilight of Empires Silver Collection features the last silver coins from each of those vanished kingdoms. It includes a German Silver Half Mark dated between 1905 and 1919, a Hungarian Silver One Corona from 1892 to 1915, and a Russian Silver 15 Kopeks dated between 1867 and 1917. Plus, each comes in Very Good to Very Fine (VG–VF) condition.

Over the last century, most of these vintage silver coins have been lost, melted or worn out. Here’s your chance to get all three at once. Each collection is housed in a deluxe wooden presentation case and includes a detailed storycard. The winds of war blew these coins away – now you can retrieve them for your vintage coin collection! Dates vary.