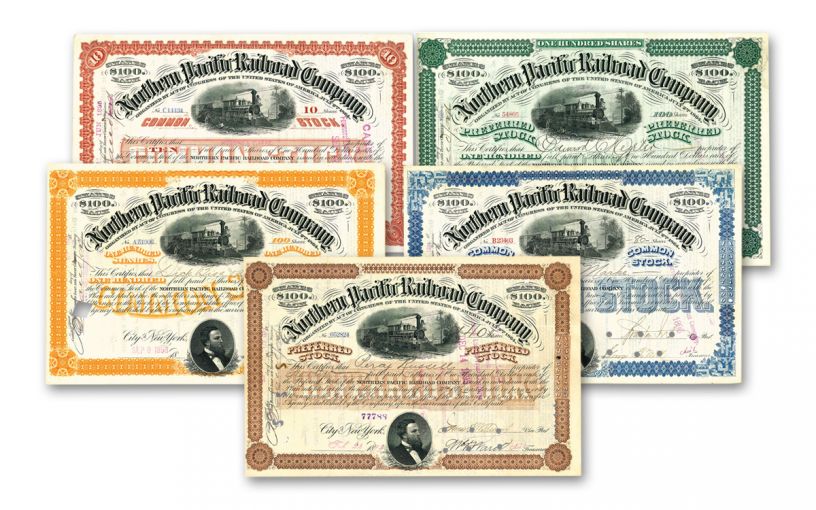 Availability: In Stock
This item will ship within 2 business days.
Item #
345343
Add to Wish List Add to Wish List Wishlist is for registered customers. Please login or create an account to continue. Add to Compare

Take a Ride on the Pacific Railroad

Printed more than 120 years ago, these stock certificates from the Northern Pacific Railroad are a real find! We’ve managed to bring together five stocks dated between 1876 and 1897, each in a different color. About the size of a standard sheet of paper, each stock features central vignettes of Frederick Billings, President of the Northern Pacific from 1879 until 1881, and a train puffing steam as it makes its way along the transcontinental Northern Pacific Railroad, which operated from Minnesota to the Pacific Northwest. A fantastic piece of American history, as Congress gave the railroad nearly 40 million acres of land grants for the project!

Chartered by Congress in 1864, the Northern Pacific Railroad was not without its ups and downs. Construction would not begin until 1870 and simply working on the railroad was not without its perils. In 1873, Lt. Colonel George Armstrong Custer and the 7th Cavalry was tasked with protecting railroad engineers along a 250-mile stretch between Billings and Glendive, Montana that had yet to be surveyed. The Lakota Sioux and Cheyenne Indians opposed construction through the Yellowstone Valley and had brought work on the railroad to a standstill in 1872, nearly killing the railroad’s chief engineer in the process. Smarting from the financial and public relations disaster, the Army sent Custer to punish the Indians and the 7th Cavalry did engage the warriors of Crazy Horse and Sitting Bull in several skirmishes.

While the Yellowstone Expedition proved successful for the Northern Pacific Railway, the financial collapse of 1873 – The Panic of 1873 – delayed work on the line and forced the company into bankruptcy. It would not be until 1883 when President Ulysses S. Grant finally drove home the final “golden spike” in western Montana that connected the railway from Saint Paul, Minnesota to Tacoma, Washington thus marking the completion of the first of the northern transcontinental railroads. Today, the Northern Pacific Railroad lives on as part of the Burlington Northern Railroad.