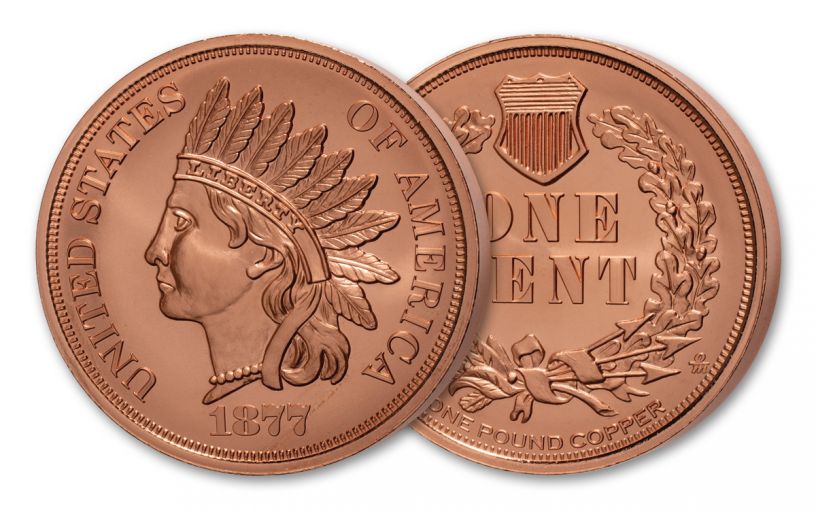 Availability: In Stock
This item will ship within 2 business days.
Item #
351820
Add to Wish List Add to Wish List Wishlist is for registered customers. Please login or create an account to continue. Add to Compare

Here’s a fun chance to collect one of the most popular coins in United States history as a unique, massive replica. It’s the key-date, low-mintage 1877 Indian Head Cent struck in one Troy pound of copper! At three-and-a-half-inches diameter, this huge tribute round is larger than a baseball! Plus, this fantastic piece of numismatic artistry features a cameo finish with a polished background and a frosted design.

Before the Lincoln Cent became the longest-running series at the U.S. Mint, there was the Indian Head Cent, depicting Lady Liberty wearing a Native American headdress on the obverse. A popular story about the coin’s design claims that when a delegation of Indian chiefs visited Mint Engraver James Barton Longacre in Philadelphia, one was so taken by the red hair of Longacre’s 12-year-old daughter, Sarah, that he let her try on his headdress. Later, Longacre used the quick sketch he made of his daughter wearing the headdress as the model for the one-cent coin he was designing. While the Indian Head cent was struck from 1859 to 1909, none is more difficult to find than the 1877 edition. The second-lowest mintage in the entire series, the U.S. Mint struck just 850,000 of these coins in 1877 compared to 7.9 million the year before in 1876 and 5.9 million the year after in 1877.

Each One-Pound Copper 1877 Indian Head Cent Replica will come housed in a protective capsule, perfect for display in your home or office. Click one of these impressive tribute rounds to your cart today!