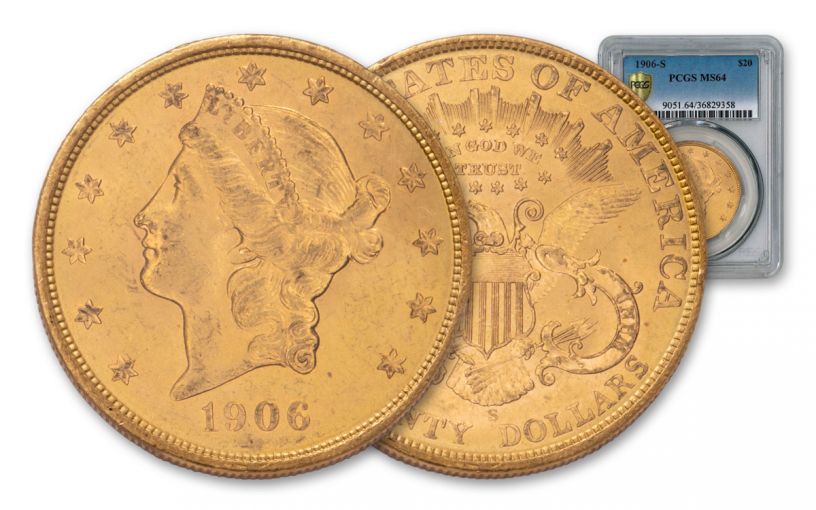 Availability: In Stock
Discontinued Product
Item #
299866
CC Payments as low as
$873.75 / month
Add to Wish List Add to Wish List Wishlist is for registered customers. Please login or create an account to continue. Add to Compare

Designed by James B. Longacre, the beloved creator of the famous Indian Head Cent, this $20 Liberty comes struck in nearly a full ounce of highly pure 90% fine gold and is an absolute “must-have” for any collection of United States coins.

This Gold Double Eagle was a long-running series, with coins struck at every operational mint — Philadelphia, San Francisco, New Orleans, Carson City and even Denver — and dates ranging from 1850 to 1907. Available here is a Type III coin dated between 1877 and 1907 (date varies). The Type III coins feature a bigger and bolder “IN GOD WE TRUST” motto as well as Lady Liberty’s neck being shortened and with a sharper angle to allow greater space to display the coin’s date.

Whatever date you receive from this important period in American history, you can be confident that you’ll be acquiring a beautifully struck coin in high collector-grade condition. In fact, each coin available here will come certified and graded by either the Numismatic Guaranty Corporation (NGC) or the Professional Coin Grading Service (PCGS) as being in beautiful Choice Uncirculated Mint State-64 (MS64) condition with nice luster and pleasing eye appeal. Grading service varies.

To hold one of these coins in your hands is to hold an important piece of American history. These coins saw the end of the 19th century and the start of the 20th. Secure one or more for your collection now.

ICONIC JAMES LONGACRE DESIGN – These coins were originally designed by James Barton Longacre (1794–1869), the 4th Chief Engraver at the United States Mint. The coin was issued with slight type variations from 1850 to 1907 making it one of America’s longest-running coin series. Dates will vary.

STRUCK IN HIGHLY PURE GOLD – Each of these $20 Gold Liberty coin was struck in .9675 ounces of highly pure 90% fine gold and measures 34 mm in diameter.

UNITED STATES LEGAL TENDER – These coins were $20 legal tender in a time when they were used mostly for large bank transfers and business transactions.

CHOICE UNCIRCULATED CONDITION – Your $20 Gold Liberty has been graded by either the Numismatic Guaranty Corporation (NGC) or the Professional Coin Grading Service (PCGS) as being in Choice Uncirculated Mint State-64 (MS64) condition. Grading service varies.

James Longacre’s $20 Gold Liberty was one of the most recognizable coins of its day — it even turned up in the saddle bags of John Wayne’s portrayal of Ethan Edwards in the 1956 Hollywood western The Searchers. Now it can turn up in your collection! Secure yours now!