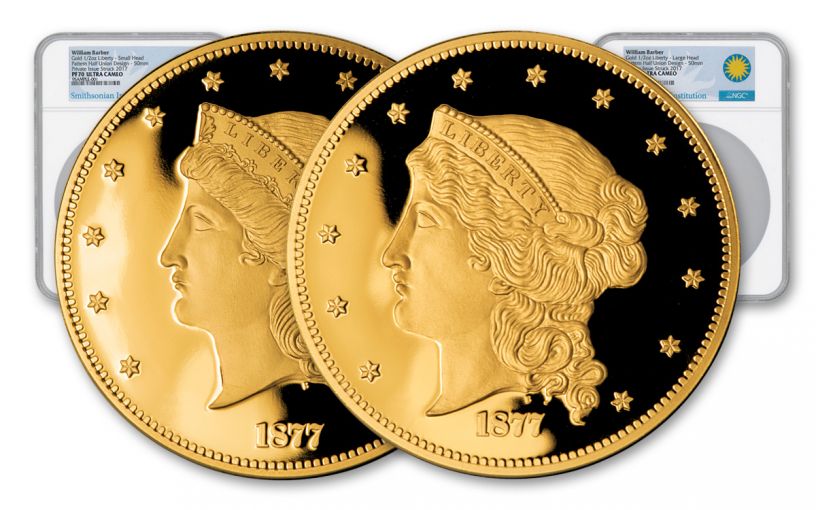 Availability: Call-In Only
This item is only available on a Call-In basis. Please call 1-800-510-6468 to speak to a representative.
Item #
315387
Add to Wish List Add to Wish List Wishlist is for registered customers. Please login or create an account to continue. Add to Compare

Own Barber’s Legendary Half Union Designs!

In the decades following the California Gold Rush, a problem emerged -- too much raw gold and not enough paper money. In response, the United States Senate passed a bill authorizing the creation of $100 and $50 gold coins, naming them the Union and Half Union, respectively. Had they been approved and issued, these would have been the largest circulating gold coins in U.S. history!

After the program was canceled, rumors spread amongst the public of these "Large Head" and "Small Head" Half Union Proofs being lost or melted down. Thankfully, the original proofs, known as Judd-1548, survived and currently reside safely within the walls of the Smithsonian.

Not planning a trip to Washington, D.C.? Don’t worry! You now have the chance to take home both incredible Half Union designs as 1877-dated proofs, each struck in a half-ounce of 99.99% pure gold and officially licensed by the Smithsonian. Bring these historic designs, certified perfect Proof-70 Ultra Cameo (PF70 UC) by Numismatic Guaranty Corporation (NGC), to your collection today!