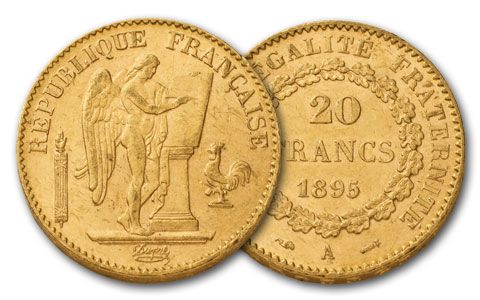 Availability: In Stock
Discontinued Product
Item #
249200
CC Payments as low as
$239.98 / month
Add to Wish List Add to Wish List Wishlist is for registered customers. Please login or create an account to continue. Add to Compare

The legend of the “Lucky” Angel started in the unluckiest of all places, waiting in line for a meeting with the guillotine. During the French Revolution, the coin’s designer, Augustin Dupré, was spared from losing his head at the last minute. By a stroke of luck, lightning flashed, scaring the executioner and saving Dupré’s life. He attributed his good luck to the Angel coin he carried in his pocket. Inspired by this tale,Emperor Napoleon Bonaparte also carried a “Lucky” Angel—but lost his coin the day before the Battle of Waterloo and promptly lost the battle. The design, which shows an angel writing the French Constitution, was revived from 1871 to 1898 on a 20 Francs gold coin. And the “Lucky” legends continued, with sea captains and fighter pilots in both world wars believing the coin brought them luck. A few coins were lucky to have remained in Brilliant Uncirculated (BU) condition . Each is struck in 90% gold and contains .1867 ounces of pure gold. Keep the legend of the Lucky Angel alive by securing yours today! Dates vary.