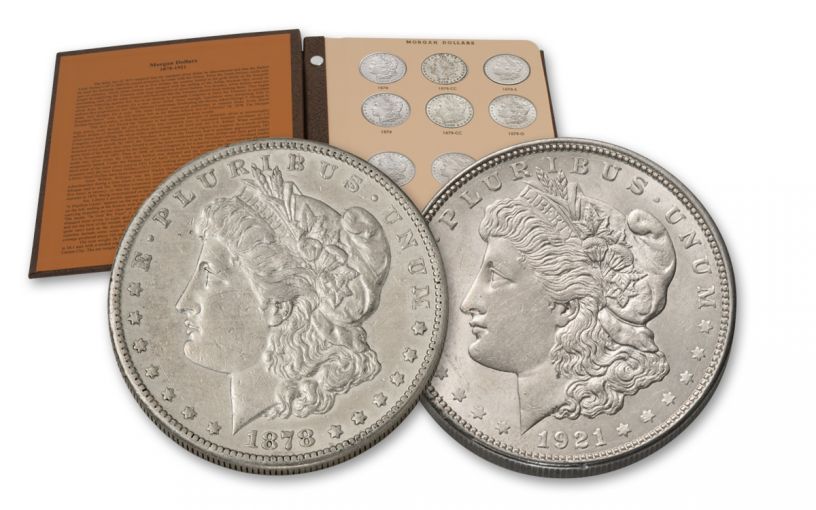 Availability: Call-In Only
This item is only available on a Call-In basis. Please call 1-800-510-6468 to speak to a representative.
Item #
348414
Add to Wish List Add to Wish List Wishlist is for registered customers. Please login or create an account to continue. Add to Compare

In the collecting world, the Silver Dollar is king. And in the world of vintage American Silver Dollars, no coin is as popular as the Morgan Silver Dollar. Struck from 1878 to 1904 and for one last time in 1921, the Morgan was the coin of the Wild West, struck with silver mined from Nevada’s famous Comstock Lode.

But then, in 1918, the Pittman Act resulted in the melting of more than 270 million Morgans. Decades later in the 1980s, the skyrocketing price of silver resulted in even more millions of Morgans meeting their end at the melting pots. It’s estimated today that as low as 15% of all Morgans remain for collectors to enjoy. That’s where this set comes in.

Starting with the coveted first-year-issue 1878 Morgan struck in San Francisco, and ending with the only Morgan to feature the “D” mint mark of the Denver Mint (struck in 1921), this wonderful 28-coin set contains one Morgan Silver Dollar from each year the series was struck, all in Extremely Fine (XF) to About Uncirculated (AU) condition. The entire set comes in a two-volume Blue Whitman Album to keep your coins protected for generations and provide room for your new Morgan collection to grow.

Hold history in your hands and secure your Morgan Silver Dollar set today.