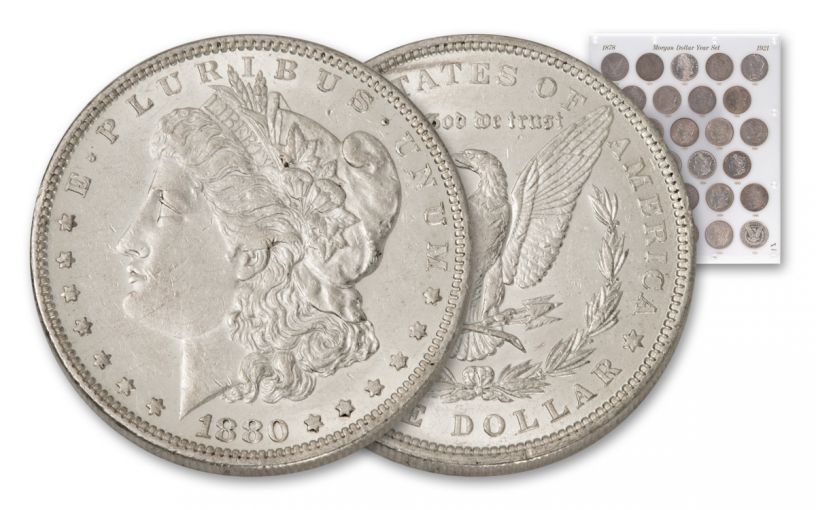 Availability: Call-In Only
This item is only available on a Call-In basis. Please call 1-800-510-6468 to speak to a representative.
Item #
311677
Add to Wish List Add to Wish List Wishlist is for registered customers. Please login or create an account to continue. Add to Compare

A Multitude of Morgans – One From Every Year It Was Struck!

Each of these U.S. Silver Dollars is an authentic piece of American history.

Unfortunately, millions have been either worn down in commerce or melted for their precious silver. The Pittman Act of 1918, for example, authorized the melting of up to 350 million Silver Dollars. It’s estimated that a scant 15% of all Morgans struck still exist in any condition today.

This fantastic 28-coin collection brings together one Morgan Silver Dollar from every year of production, from 1878 to 1921. That includes the highly sought-after turn-of-the-century 1900 Morgan, the tough-to-find 1895 issue, the last-year 1921-D Morgan (the only Morgan struck at the Denver Mint) and the coveted first-year 1878-CC Morgan struck in Carson City. Every coin comes in Extremely Fine (XF) to Brilliant Uncirculated (BU) condition, housed together in a white plastic holder that will keep your coins protected for generations.

There’s no telling what sort of adventures these coins enjoyed before arriving in our vaults – long days on the Western trails, being offered up in card games or held as a good luck token on the battlefields of Europe. But no matter where they’ve been, each coin still has one more adventure to go – as part of your collection! Tracking all of these coins down was no easy task, and there’s no telling when our limited supply will run out. Own a full set of Morgan Silver Dollars and order yours today! Mint marks and grades vary.

Don’t miss your chance to get a complete year-date series of Morgan Silver Dollars with this 28-coin set. Get your collection MORGAN-ize your collection by clicking one to your cart today!