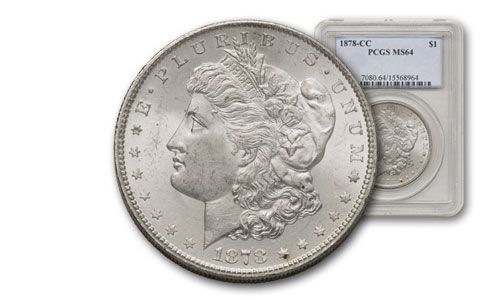 Availability: Out of Stock
Discontinued Product
Item #
248452
Add to Wish List Add to Wish List Wishlist is for registered customers. Please login or create an account to continue. Add to Compare

The First Year in Carson City

The vast deposits of silver found in Nevada’s Comstock Lode were shipped to mints around the country to be struck into Morgan Silver Dollars. But the shortest trip of them all was from the mines just down the road to the Carson City Mint! The 1878-CC Morgan Silver Dollar is the first-year-of issue both for the coin and the mint. Only 2.2 million were struck in 1878 in Carson City. Both the Philadelphia and San Francisco Mints struck four times as many that year! We found a small hoard graded by Professional Coin Grading Service (PCGS), and even though it’s only 83 coins, that’s actually a large number to find all at once. Not only that, these will disappear fast. We are pleased to give you the opportunity to snap one or more up while they’re available. The Carson City Mint struck Morgan Silver Dollars between 1878 and 1893. Less than 2% of all Morgan Silver Dollars produced were struck at Carson City! That makes these first year coins even more desirable. They’re a great tribute to the craftsmen at the mint and show sharp crisp designs and super fresh mint luster. Each is a superior example graded by Professional Coin Grading Service (PCGS) and they all display the coveted “CC” mintmark on the reverse under the eagle. Each year these first-year “Comstock Lode” Morgans get harder and harder to find, so snap these up. Call now!