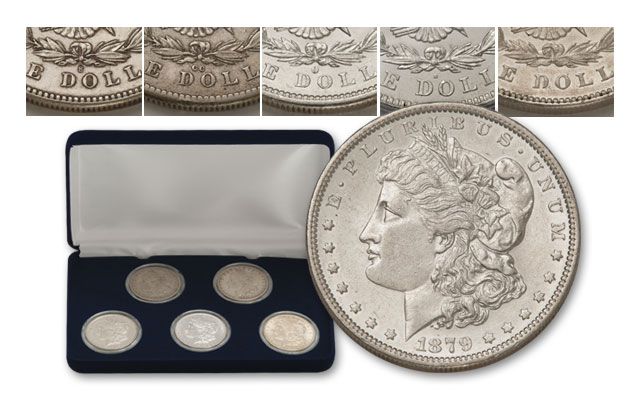 Availability: Out of Stock
This item is currently Out of Stock. Please sign up to be notified if this product becomes available.
Item #
237212
Add to Wish List Add to Wish List Wishlist is for registered customers. Please login or create an account to continue. Add to Compare

Every First From All Five Mints

What’s better for your collection than a first? In this case, FIVE firsts are better than one! As America’s most beloved coin, these five firsts comprise the ultimate Morgan Dollar set. Now, it’s easier than ever to own these historic Morgan Dollars struck at each of the five mints. You will receive one of each first year issue, including the: Philadelphia Mint (1878-P 7TF), San Francisco Mint (1878-S), Carson City Mint (1878-CC), New Orleans Mint (1879-O) and Denver Mint (1921-D).

Hundreds of millions of these coins were lost to the ravages of time and the melting pot - many more were just plain worn down through circulation. This set is available in Extremely Fine (XF) or Brilliant Uncirculated (BU) condition. Both grades are highly sought after by collectors. Each coin is protected in a clear capsule and housed in a deluxe presentation case. Each set comes with a Morgan Dollar checklist, a storybook on the U.S. Historic Mints and the newly released book, Morgan Dollar, Legendary Coins by Miles Standish. Don’t miss your chance to own this set in collection-worthy condition. Call before these beauties disappear from our vaults!