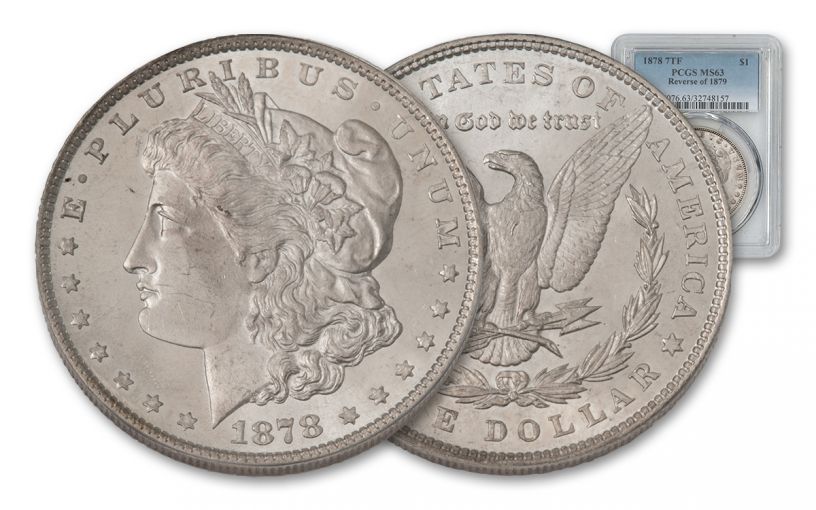 Availability: Out of Stock
This item is currently Out of Stock. Please sign up to be notified if this product becomes available.
Item #
252206
Add to Wish List Add to Wish List Wishlist is for registered customers. Please login or create an account to continue. Add to Compare

Third Time's the Charm with This First-In-Series Morgan!

The Morgan Silver Dollar got its start in 1878, with initial coins minted at the Philadelphia mint and a reverse that featured an American bald eagle with 8 tail feathers. However, Mint Director Henry Linderman quickly ordered design changes, resulting in not one but TWO subsequent versions of the coin. The final version featured a slanted top arrow feather in the arrow bundle held in the eagle's talons and a rounded (convex) eagle's breast. This reverse, known as the "Reverse of ‘79" or third reverse, is what graces these unique Morgan Dollars -- now available from GovMint.com.

With an obverse designed by George T. Morgan, 7th Chief Engraver of the U.S. Mint, the Morgan Silver Dollar boasts an image of Lady Liberty facing left, stars circling her head. The obverse also includes the inscriptions "LIBERTY," "E PLURIBUS UNUM" and the date 1878. The coin's reverse depicts the bald eagle with the unique characteristics described above, soaring with outstretched wings as it holds an olive branch and arrows in its talons. The reverse's inscriptions include "UNITED STATES OF AMERICA," "ONE DOLLAR," and an archaic-lettered "IN GOD WE TRUST." Professional Coin Grading Service (PCGS) has graded this Morgan MS63, indicating the coin will arrive in mint, uncirculated condition with very few marks -- the perfect Morgan to start your collection. But act fast! First-year coins always go quickly, so get yours now.