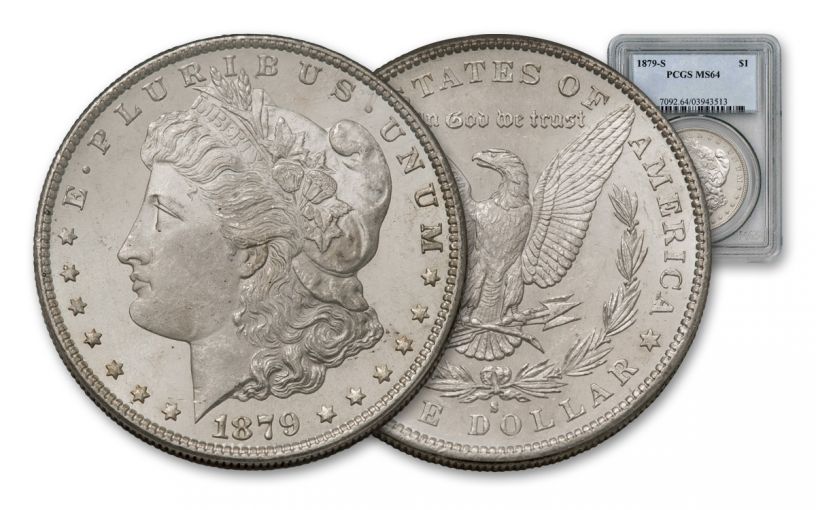 Availability: Out of Stock
This item is currently Out of Stock. Please sign up to be notified if this product becomes available.
Item #
243289
Add to Wish List Add to Wish List Wishlist is for registered customers. Please login or create an account to continue. Add to Compare

And of all the Morgans ever struck, collectors believe that the most beautiful are those that bear the “S” mint mark of the San Francisco Mint. In fact, the first five Morgans struck in San Francisco are regarded by many numismatists as the best-struck Morgans of the entire series! And now you secure this dazzling second-year-of-issue 1879-S Morgan Silver Dollar struck at the San Francisco Mint.

This coin was actually struck at the San Francisco Mint’s second building, construction on which was completed in 1874. The building was soon nicknamed the “Granite Lady” due to its massive two-story structure built out of granite to handle the heavy minting equipment. This second building remained in operation for 63 years and was the only financial institution left standing and still in operation following the Great San Francisco Earthquake of 1906.

This is a great way to add a key, early-date Morgan Silver Dollar struck at San Francisco’s famous Granite Lady to your collection. Plus, it will come certified and graded by either the Professional Coin Grading Service (PCGS) or the Numismatic Guaranty Corporation (NGC) as being in Choice Uncirculated Mint State-64 (MS64) condition! Grading service varies.