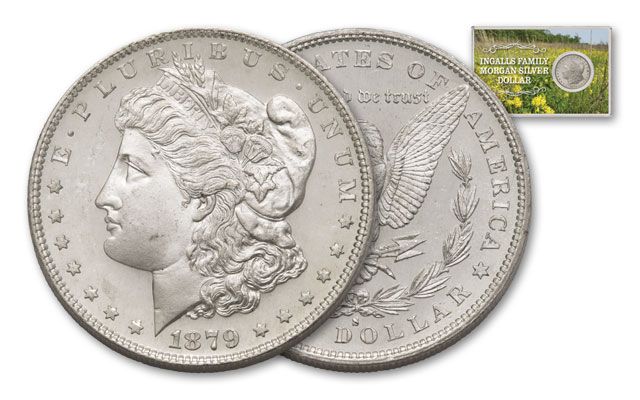 Availability: In Stock
This item will ship within 2 business days.
Item #
261673
Add to Wish List Add to Wish List Wishlist is for registered customers. Please login or create an account to continue. Add to Compare

Big Silver Dollar on the Prairie

The year was 1879 and the San Francisco Mint entered its second year striking Morgan Silver Dollars. Meanwhile, the Ingalls family moved to Dakota Territory so Laura’s Pa could take a job with the railroad. In her novels, Laura Ingalls Wilder recounted her life in the early American frontier, which were later popularized by the Little House on the Prairie television series. One of Laura’s stories recounted Pa donating his last $3 that he was saving to buy boots. Instead he generously donated it to the church for a new bell. You can almost imagine Pa pulling three shiny Morgan Silver Dollars out of his vest pocket for this worthy cause. Struck in 90% silver, and mined from the Comstock Lode in Nevada, these oversized U.S. coins are famous for their incredibly sharp details. Unfortunately many of these coins were lost to mass meltdowns, and even less were left in good condition. Your 1879-S $1 Morgan Silver Dollar BU will arrive in collection-worthy Brilliant Uncirculated (BU) condition. Don’t delay, our supply is limited. And at this desirable grade—collectors are calling already.