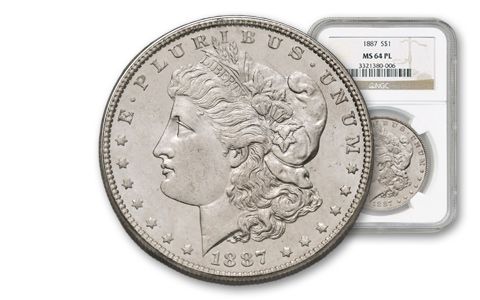 Availability: Out of Stock
Discontinued Product
Item #
222075
Add to Wish List Add to Wish List Wishlist is for registered customers. Please login or create an account to continue. Add to Compare

One of the least-known facts about America’s most popular collector coin – the Morgan Silver Dollar – is that only about 1% of Morgans are graded as being in Proof-Like (PL) condition. Though not traditional Proof coins, these Morgans were some of the first to be struck from newly polished dies, giving them slightly mirrored surfaces. There’s so few because the effect quickly wears off the dies. At only a small premium over non-Proof-Like dollars, these are a great buy, and are getting harder to find every day. Each coin available in this offer dates between 1879 and 1904 and comes certified in Choice Uncirculated Mint State-64 (MS64) condition by either the Numismatic Guaranty Corporation (NGC) or the Professional Coin Grading Service (PCGS). Dates and grading service vary.

Only 1% of the Morgan Silver Dollar population has received a Proof-Like designation. Here’s your chance to get one and join an elite fraternity of Morgan Collectors. Click one to your cart today!