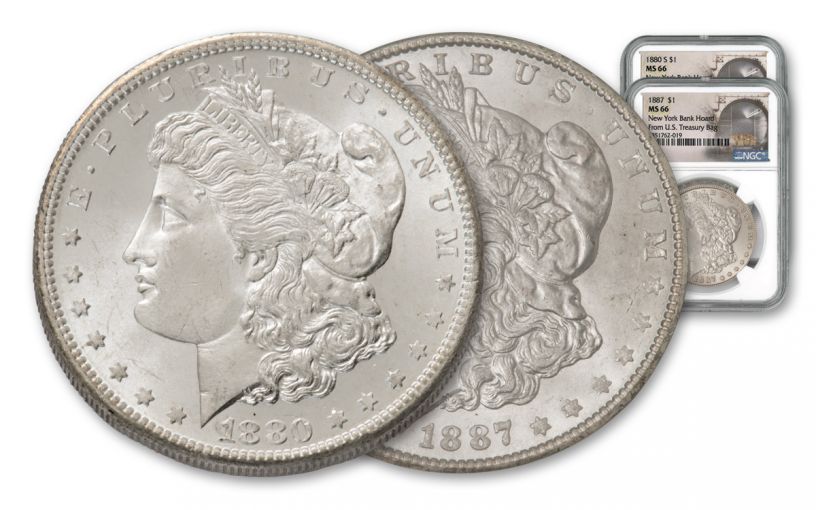 Availability: Out of Stock
This item is currently Out of Stock. Please sign up to be notified if this product becomes available.
Item #
339025
Add to Wish List Add to Wish List Wishlist is for registered customers. Please login or create an account to continue. Add to Compare

Now you can own a piece of this incredible New York Bank Hoard – the last of the Treasury Hoard bags of Morgan Silver Dollars – with this incredible two-coin set featuring the 1880-S (San Francisco “S” mark)  and 1887-P (Philadelphia no mark) found in the Hoard. These coins have all been certified, graded and encapsulated by the Numismatic Guaranty Corporation (NGC) as being in Mint State-66 (MS66) condition. Out of the 16,000 coins in the hoard, just 842 earned a grade this high! Your set comes with a 120-page hardcover book on the Morgan Dollar by Miles Standish, story books on both the New York Bank Hoard and the famous Treasury Hoard, and a beautiful wooden display case.

Get your piece of the New York Bank Hoard of Morgan Silver Dollars from the original U.S. Treasury Hoard. Quantities are extremely limited, so secure this two-piece set now!