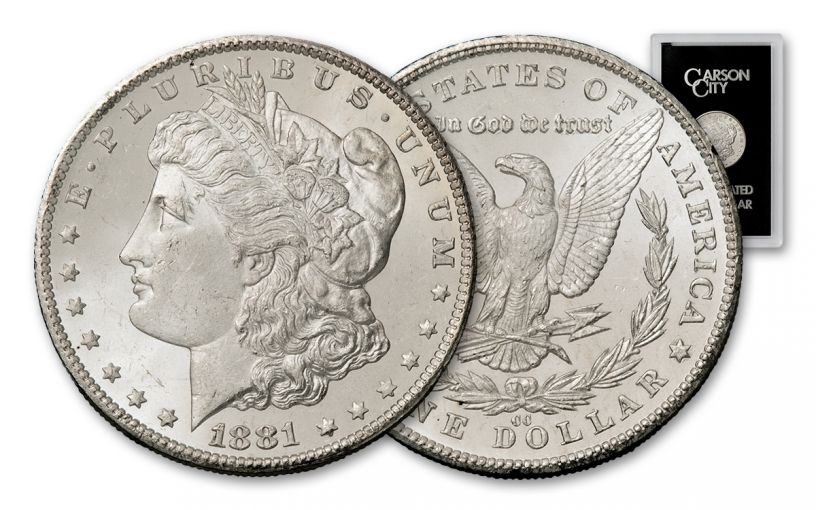 Availability: Out of Stock
This item is currently Out of Stock. Please sign up to be notified if this product becomes available.
Item #
243577
Add to Wish List Add to Wish List Wishlist is for registered customers. Please login or create an account to continue. Add to Compare
Related Articles
Product Description

Of all the Morgan Silver Dollars minted between 1878 and 1921, the most coveted and sought-after are those struck at the fabled Carson City Mint. The Comstock Lode, the largest silver find in the United States up to the time, was just miles away. And while the Carson City Mint struck only a small share of the complete Morgan mintage, each has the "CC" mintmark that collectors love.

This example from 1881 is in it its original Government Services Administration (GSA) holder and is also graded Mint State-63 (MS63) by Numismatic Guaranty Corporation (NGC). The 1881 Carson City Morgan is the second scarcest of all, with a mintage of only 296,000 coins.

But, you may be asking, what's the GSA holder all about? Well, for decades, bags of Carson City Morgans were stored in vaults at the U.S. Treasury. These coins were discovered in the 1960s, and because of their collector value, the GSA sold them at a premium through several sales in the 1970s. Each was enclosed in a special hard plastic holder -- a style that would be the forbearer of today's graded coin "slabs." In fact, because of the historic significance and collector value of these GSA holders, NGC leaves theses Morgans in their holders and grades the coins from the outside. After inspection, a strip with the grade and certification is applied around the holder.

It's a great way to own this historic coin, especially one as scarce as this 1881 Carson City Morgan. Order now and bring one home to your collection!