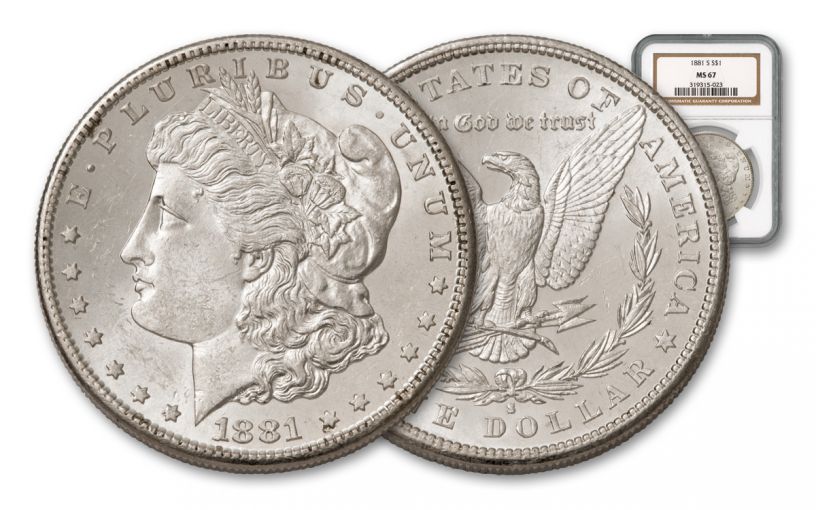 Availability: Out of Stock
This item is currently Out of Stock. Please sign up to be notified if this product becomes available.
Item #
243285
Add to Wish List Add to Wish List Wishlist is for registered customers. Please login or create an account to continue. Add to Compare

Numismatists have long recognized that the Morgan Silver Dollars produced at the San Francisco Mint between 1878 and 1882 are among the highest-quality Morgans found anywhere. The artisans at the mint seemed to have discovered the “secret sauce” for the popular silver dollar – a combination of the best dies, best-prepared planchets and the innate ability to apply just the right amount of pressure when striking the coins. The result is sparkling sharp silver dollars with crisp designs and blazing mint luster – just the way designer George T. Morgan envisioned them.

To many numismatists, it didn’t get better than the 1881-S Morgan Silver Dollar. Often considered the best-struck Morgan of the entire series, the bold strikes, booming luster and overall terrific eye appeal of this key-date coin makes it a centerpiece of many Morgan and vintage Silver Dollar collections.

Among all Morgans, the best are always those that stand out, and according to current Numismatic Guaranty Corporation (NGC) population reports, out of the 3.33 million Morgan Silver Dollars that have been submitted for grading, a mere 17,938 have come back with a grade of Mint State-67 (MS67) or higher. That’s less than one percent of all Morgans submitted! Not only did we manage to secure one of those coveted “top 1%” Morgans, but it’s a top-tier 1881-S Morgan! Become the envy of your fellow Morgan collectors and secure this Superb Gem MS67 piece for your collection today.

A coin this nice will not last for long. Secure this 1881-S Morgan Silver Dollar in Superb Gem Mint State-67 condition now while you still can!