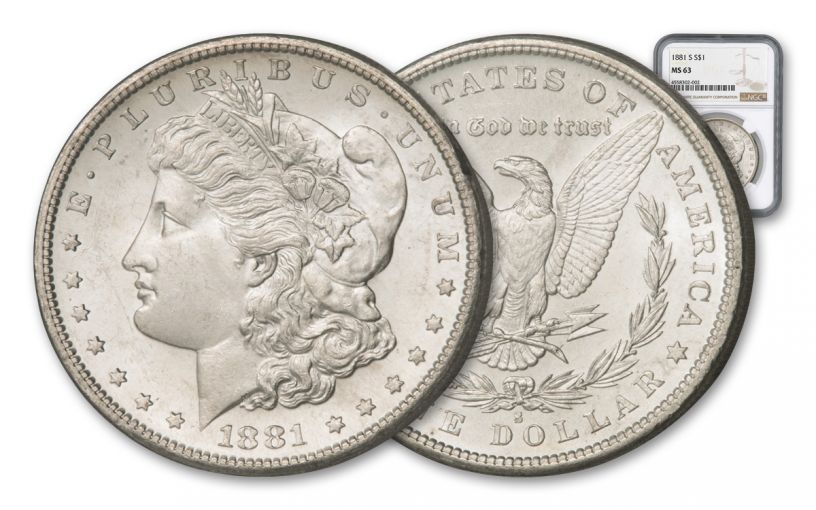 Availability: In Stock
This item will ship within 2 business days.
Item #
302666
Add to Wish List Add to Wish List Wishlist is for registered customers. Please login or create an account to continue. Add to Compare

Here's an 1881 Morgan Silver Dollar from the early days of striking at the San Francisco Mint. It's from the fourth year of production and was struck from silver wrested from the famous 'Comstock Lode' in Nevada. There's no doubt about it. Morgan Silver Dollars are among the most sought-after collector coins in America. For generations, their big size, hefty silver content and vintage 19th century design have secured their place at the top of the collecting pyramid. Morgan Dollars from San Francisco are particularly desirable. Numismatists agree they're among the best Silver Dollars ever struck anywhere. This example grades Numismatic Guaranty Corporation (NGC) or Professional Coin Grading Service (PCGS) Mint State 63 (MS63). Add one to your collection now!

• Each Coin is Struck in 90% Pure Silver -- The same precious silver content used on all vintage U.S. circulating silver coins

• Designed by George Morgan -- One of the most celebrated coin designers in U.S. Mint history

• Professionally Graded -- By NGC or PCGS, grading service our choice

Because they're also heavy, these big Silver Dollars were easily damaged in transport—nobody really cared at the time. So finding one in MS63 uncirculated condition makes this 1881-S Morgan a real prize, and a great addition to your collection.

Every year these popular Silver Dollars get harder and harder to find. By securing yours today, you can avoid future disappointment and the uncertainty of future supplies and prices. Order yours now!